The Trail Through Time is a short hike located in Rabbit Valley and is part of the McInnis Canyons National Conservation Area. It's located 26 miles west of Grand Junction and 2 miles from the Colorado-Utah border on I-70. The exit is well marked (exit #2). The Trail Through Time is a 1.5 mile loop trail that gains about 170 feet in elevation up the side of a hill. This has been rated a moderate hike by others, but I found it pretty easy. There are rest stops with covered benches along the way. The best time to take this hike is spring and fall, but be sure to bring plenty of water any time you go because it is a desert hike after all. The Trail Through Time is all about dinosaurs. In addition to the loop trail featuring several fossil bones, there is a dinosaur quarry (Mygatt-Moore quarry) that is still periodically worked.

The Mygatt-Moore dinosaur quarry has been worked since the early 1980's and has produced over 4000 dinosaur bones, mostly from the Jurassic Period. The two most common dinosaurs represented are Allosaurus (meat eater) and Apatosaurus (plant eater). The quarry is also known for the discovery of Mymoorapelta, an ankylosaur (armoured dinosaur). The quarry has also yielded fossil bones from prehistoric stars such as Camarasaurus and Diplodocus. The quarry is administered by the Museum of Western Colorado in conjuction with the BLM. The Museum offers dinosaur digs during the summer where you can try your hand at unearthing a fossil or two. 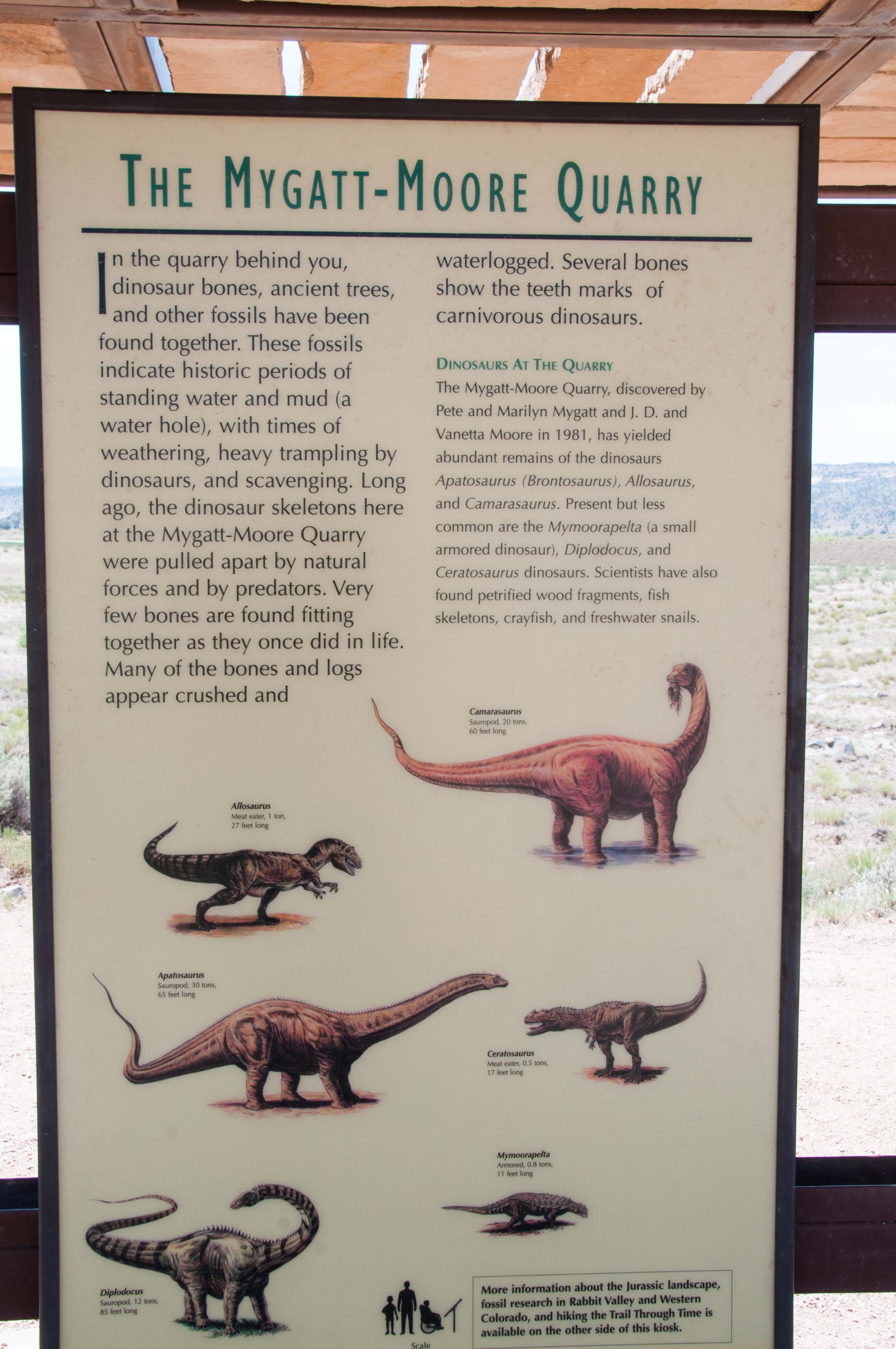 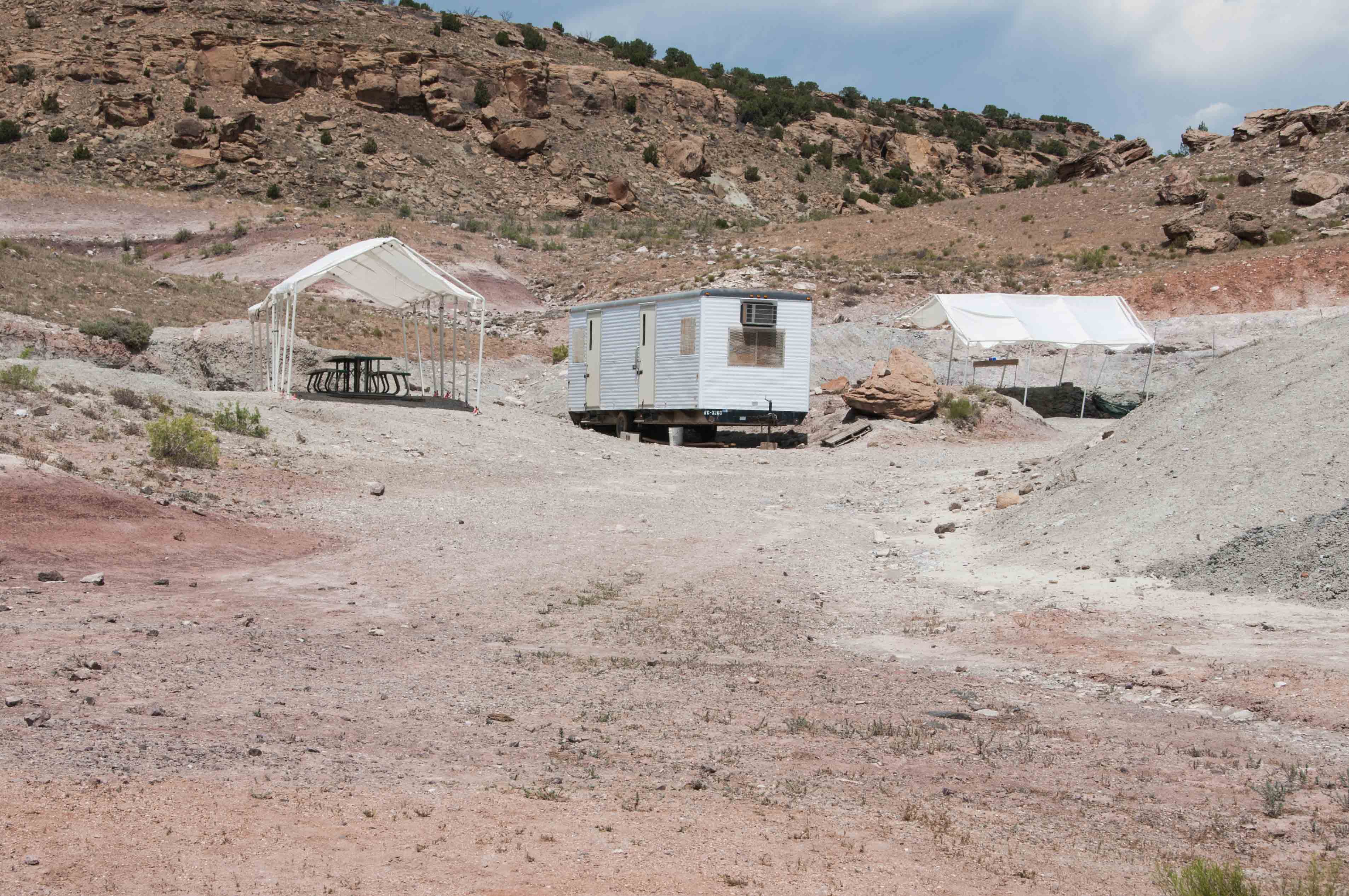 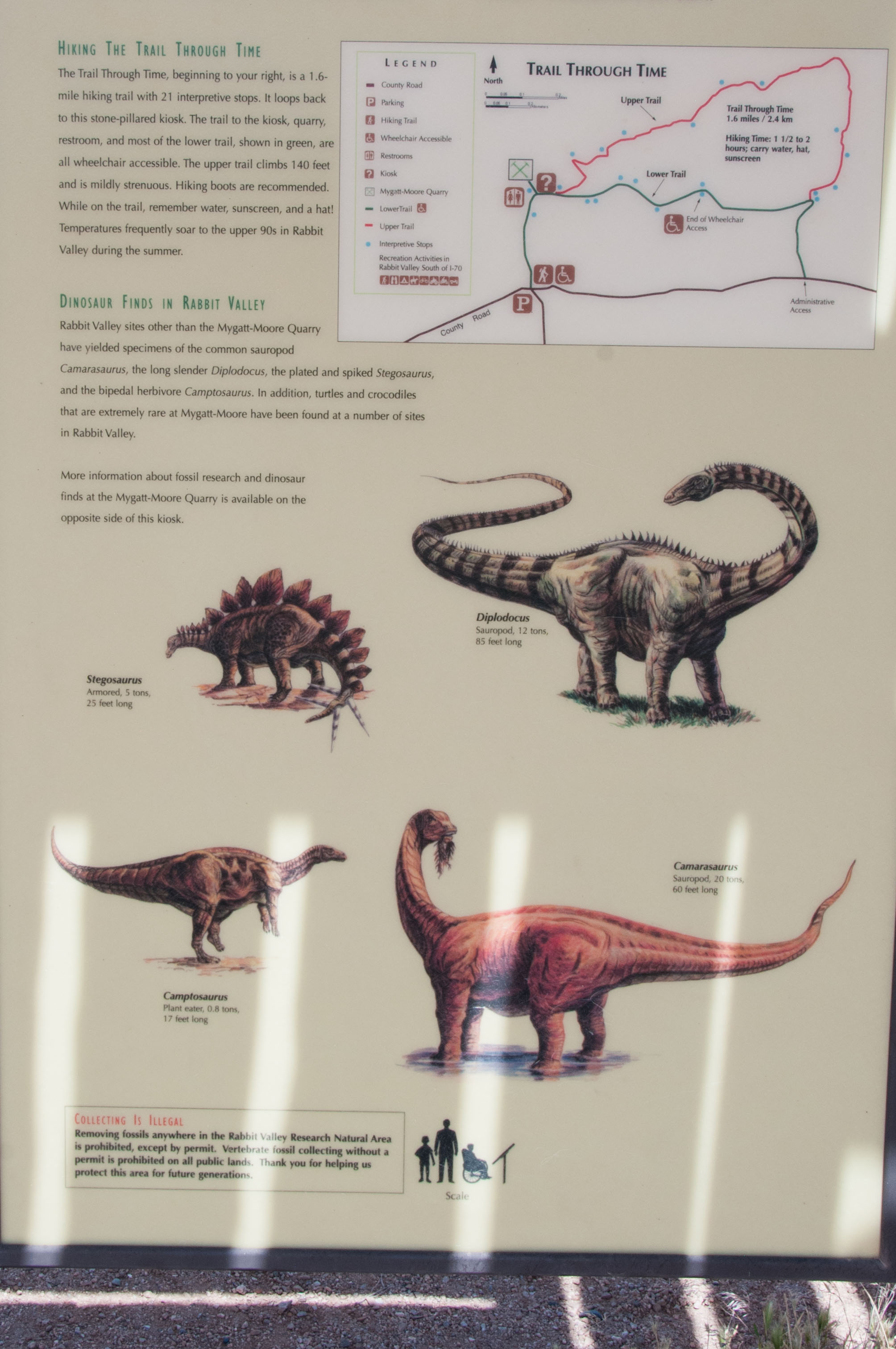 This stop along the trail has some exposed Camarasaurus bones from the front half of the dinosaur. The vertebrae are labeled A and B and the forelimb labeled C. 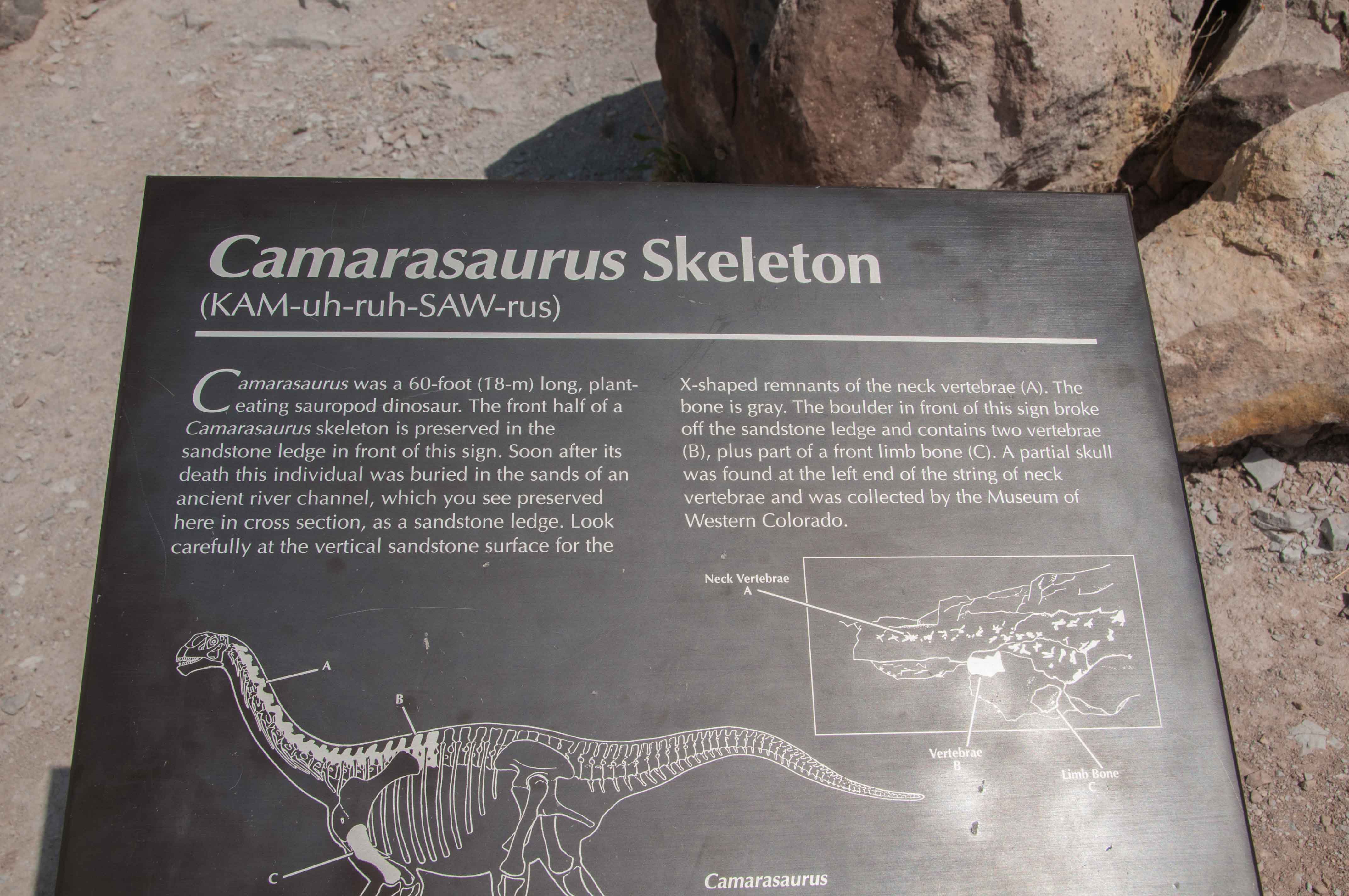 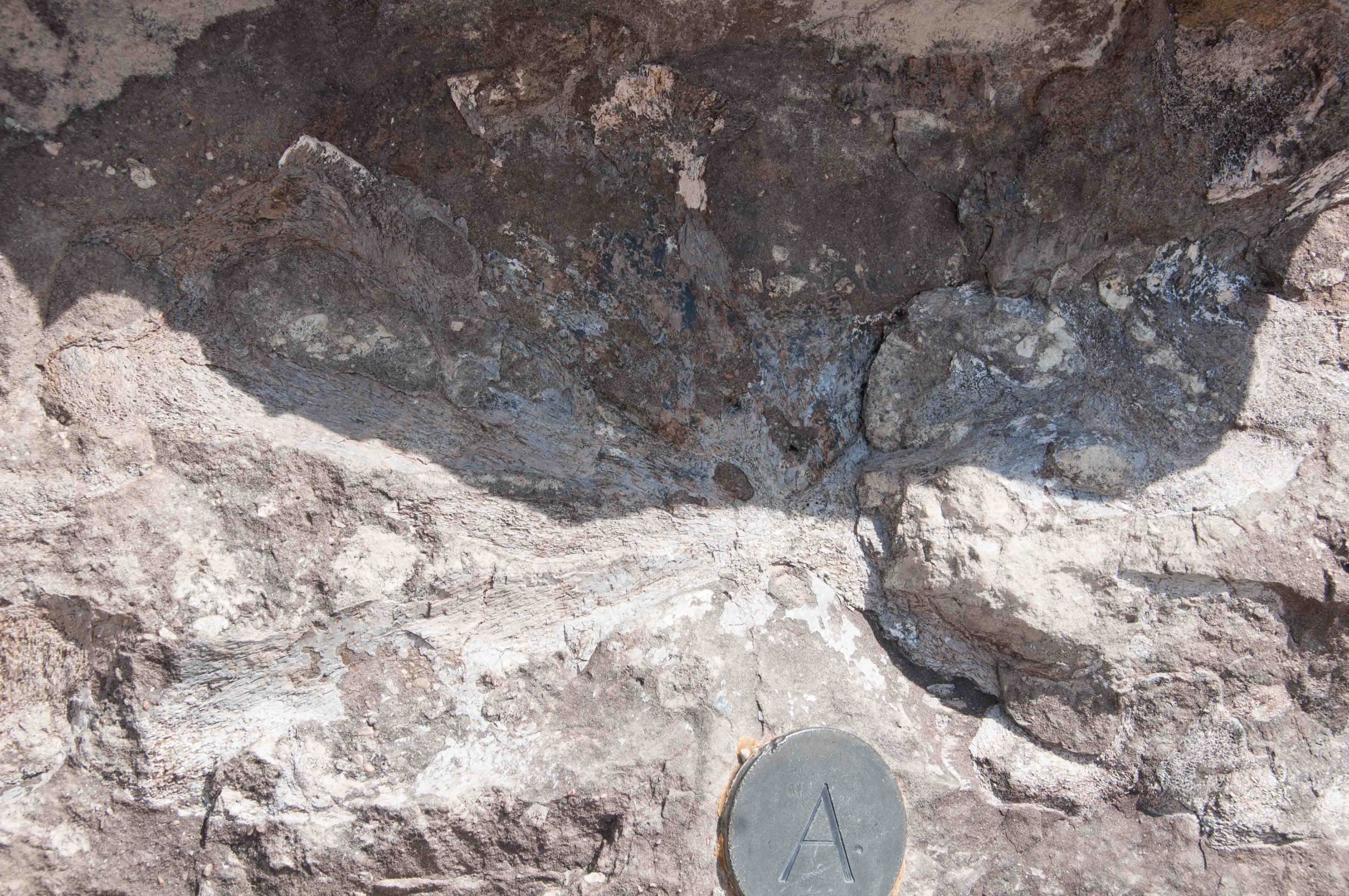 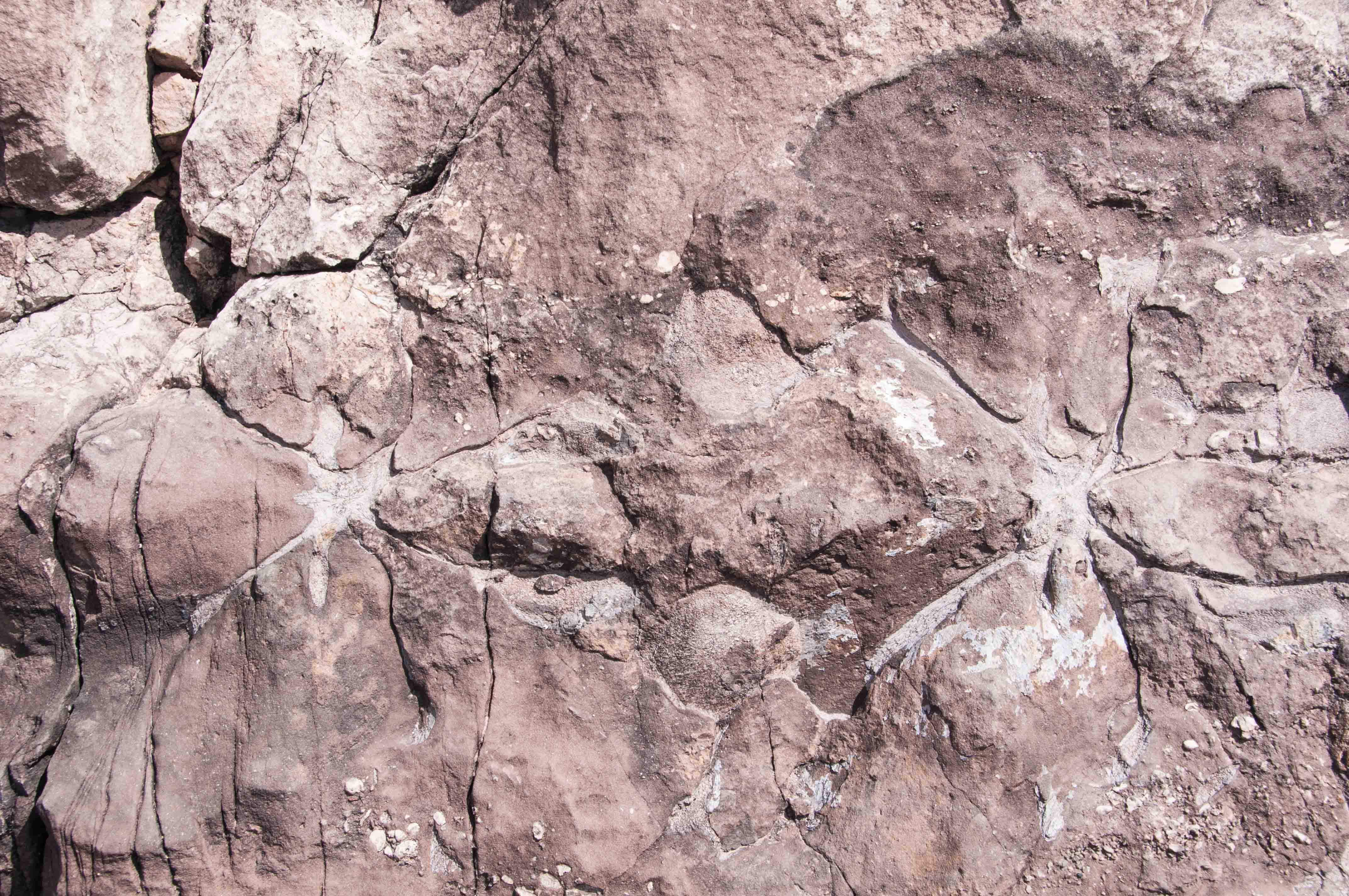 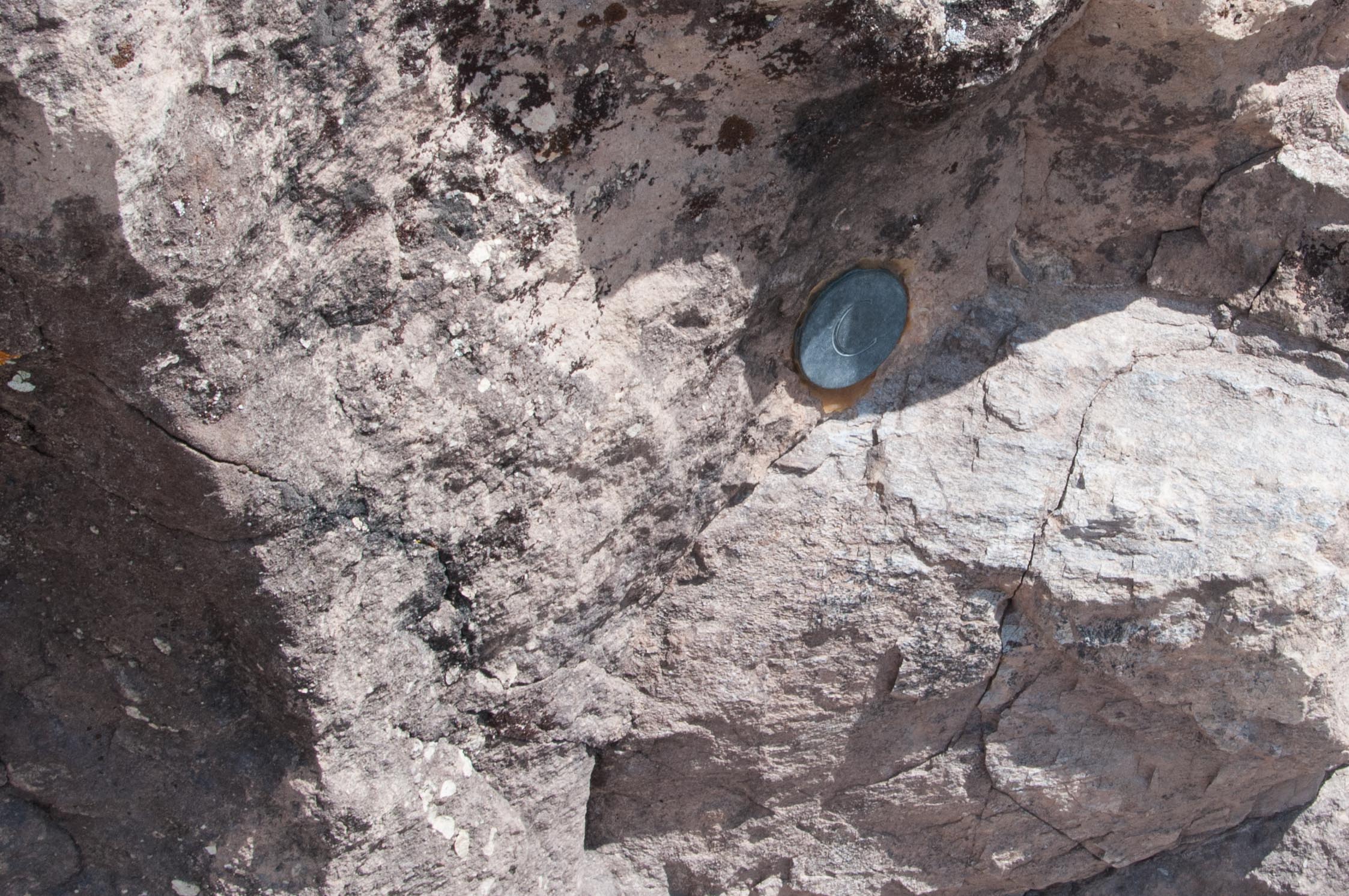 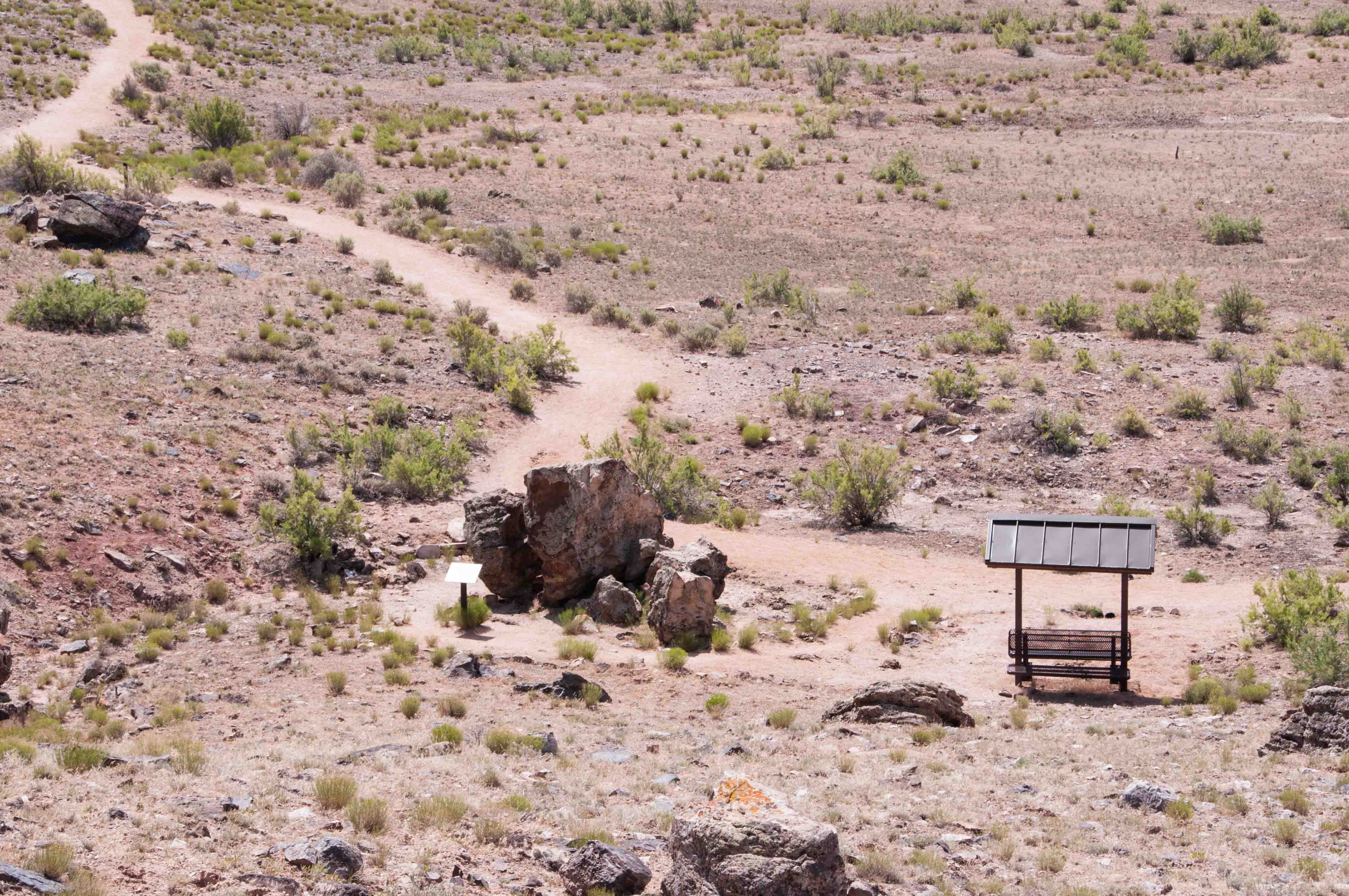 Part of the Trail with a covered bench 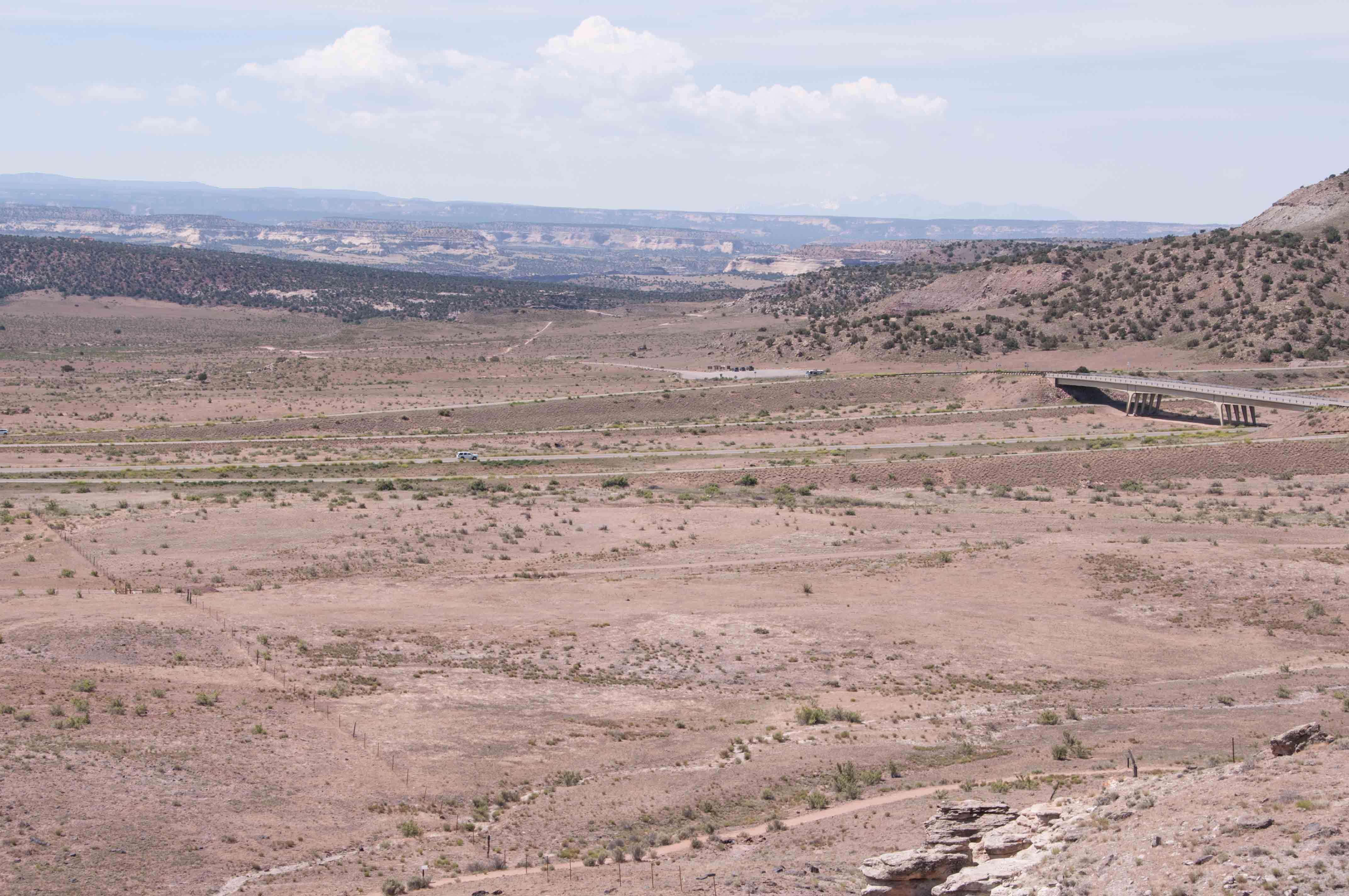 View from Rabbit Valley Overlook
I-70 in Distance 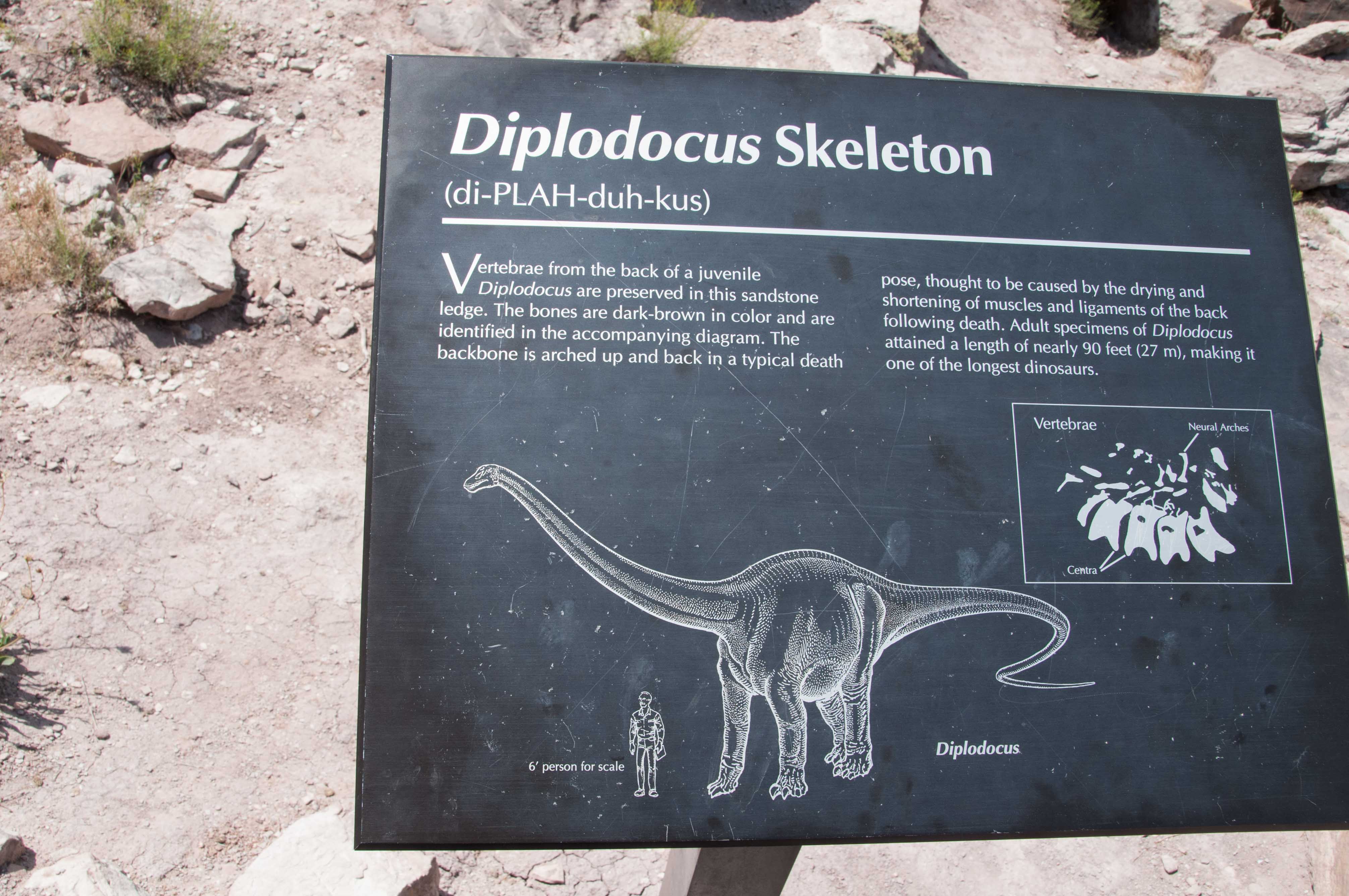 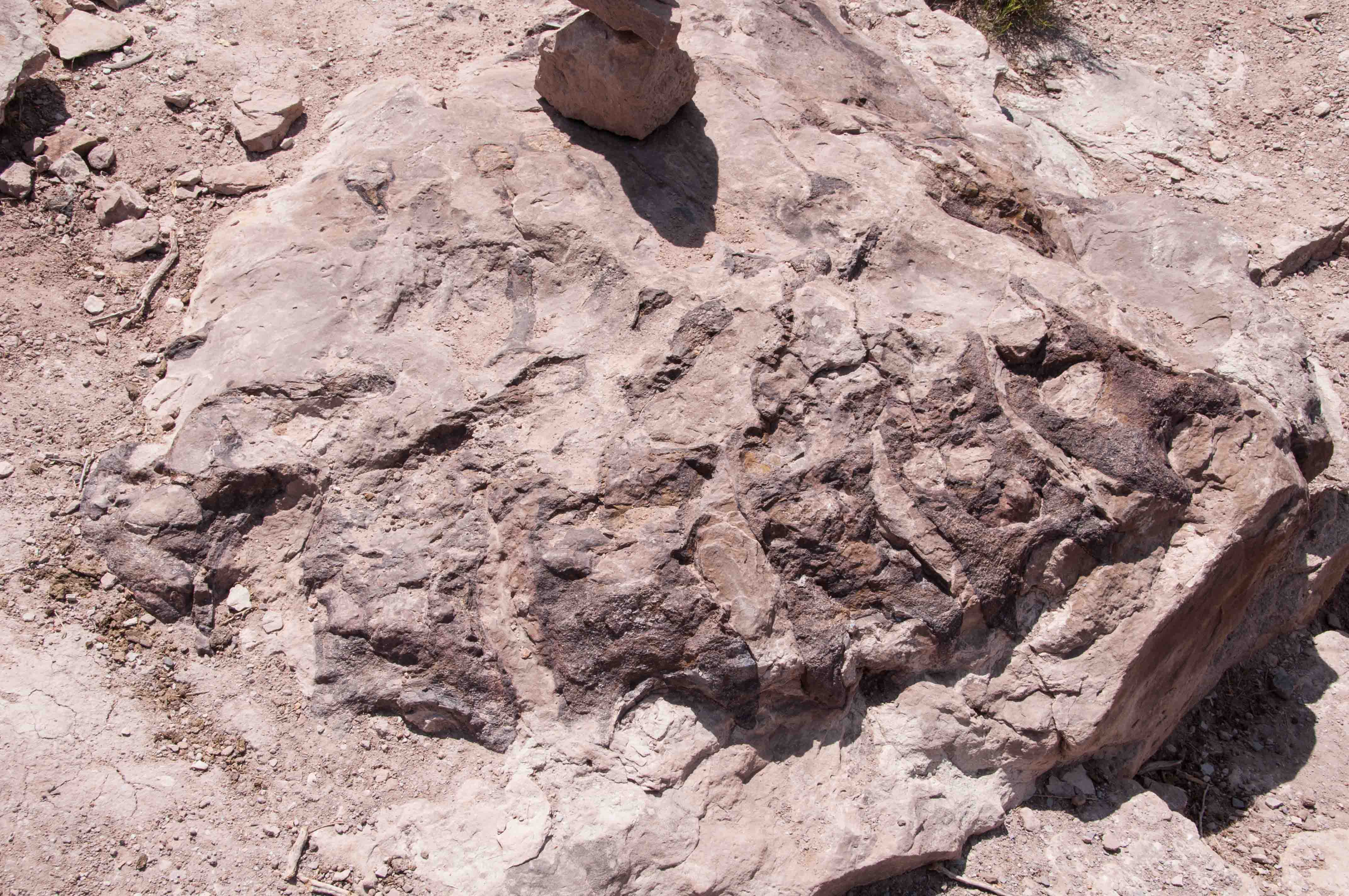 Uranium is commonly found in the Morrison Formation and there was a lot of uranium mining throughout this area in the 1960's and 70's. On August 23, 1968 two prospectors filed a mining claim on this spot and marked it with a wooden post and two rock cairns. The paperwork was placed in a Prince Albert tobacco can and put in one of the cairns. Was this a potential uranium mine? No one knows because the claim and location were never filed with with the Mesa County Clerk and Recorder. The photo to the right shows the wooden post mining claim marker. 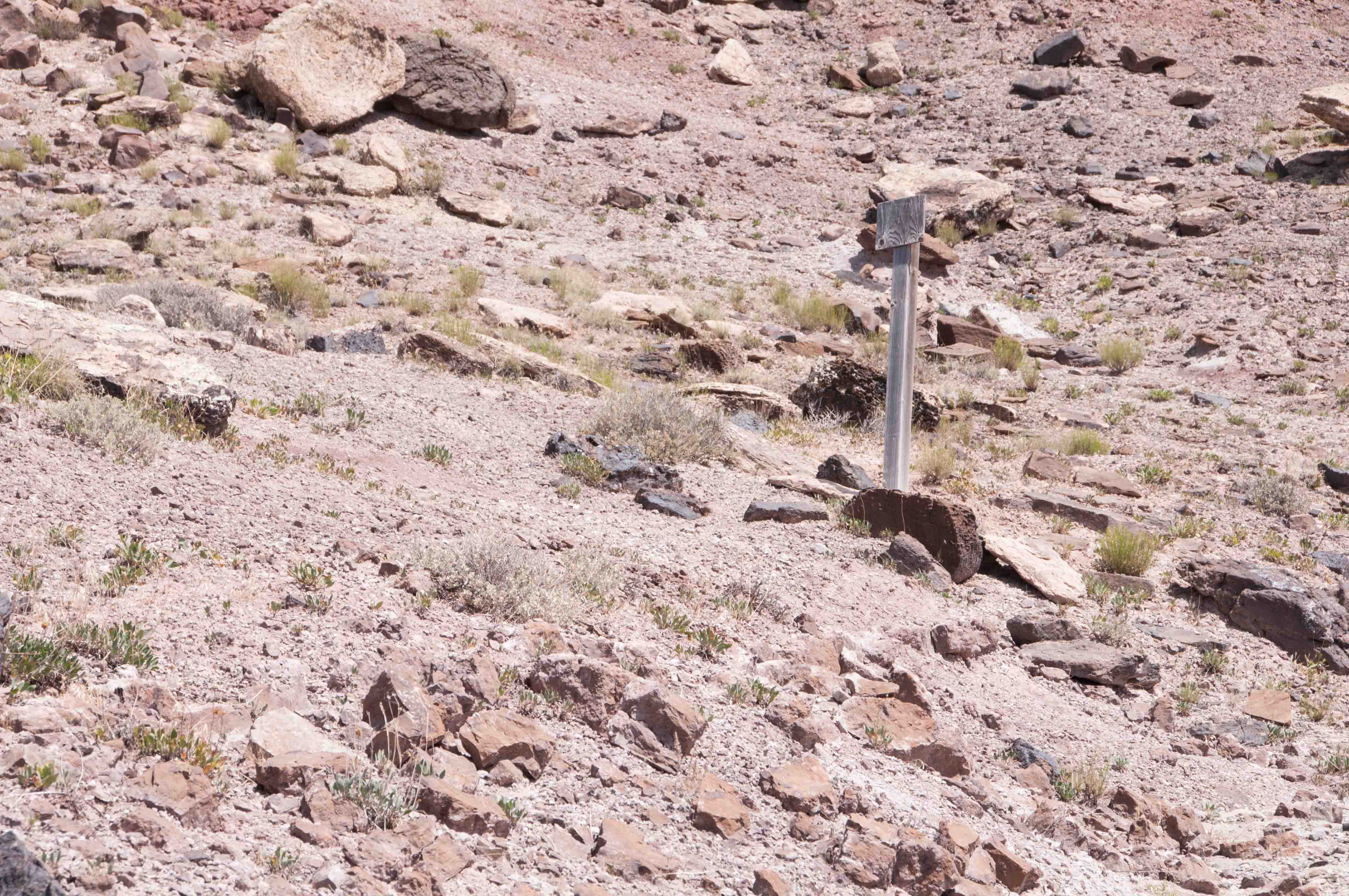 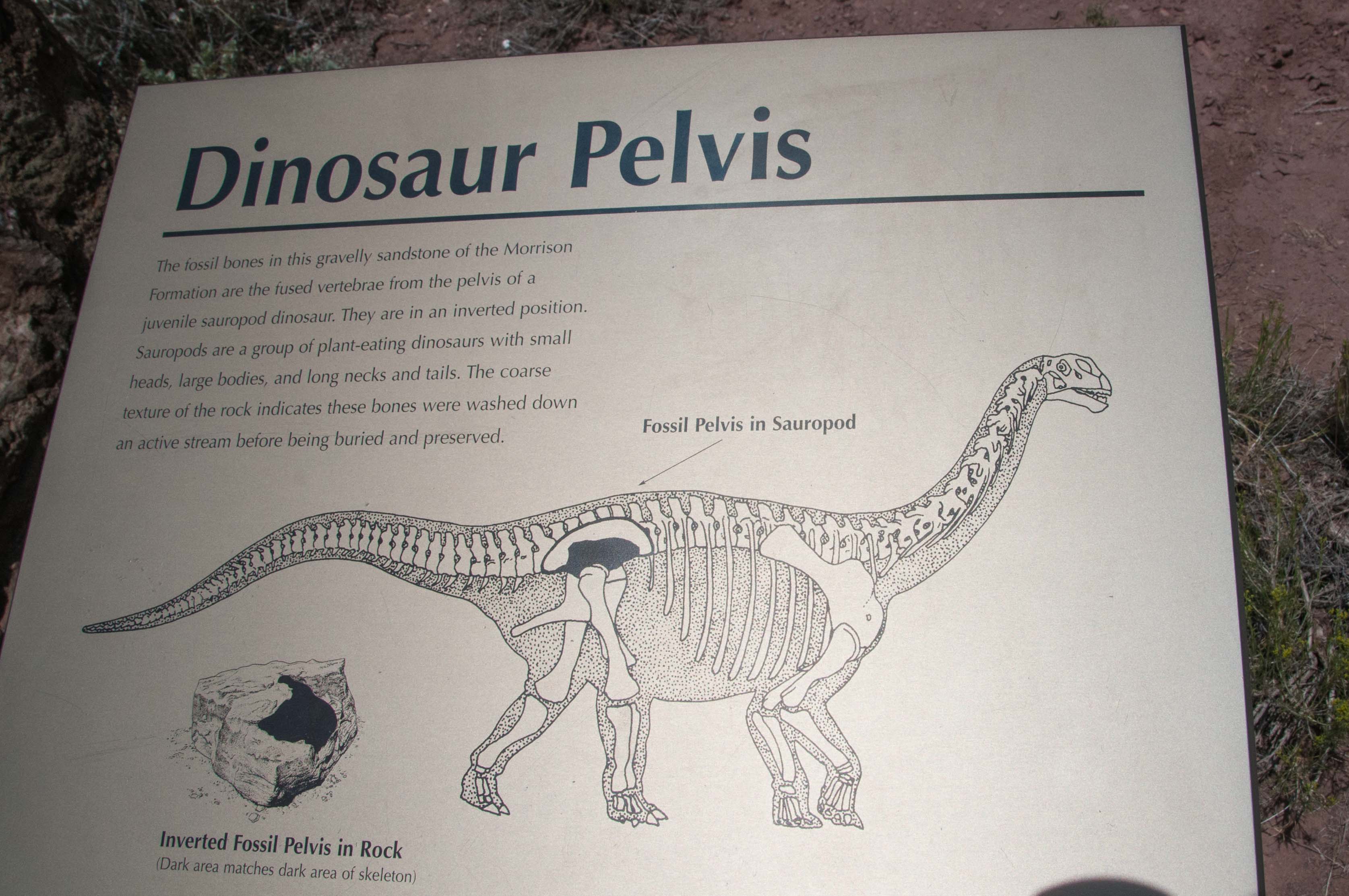 I found it hard to tell this fossil from the rock. Maybe it will be easier for you to recognize. 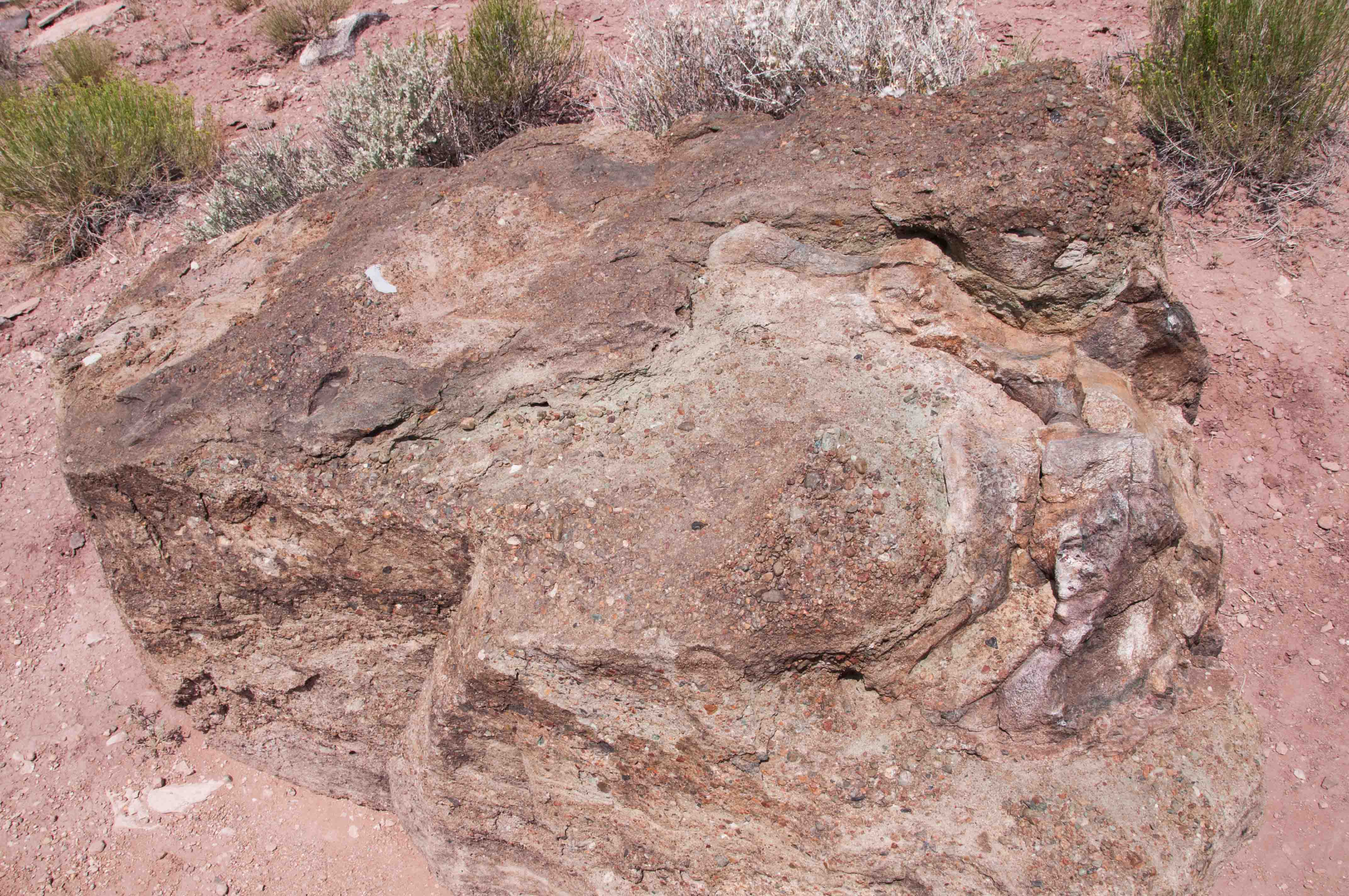 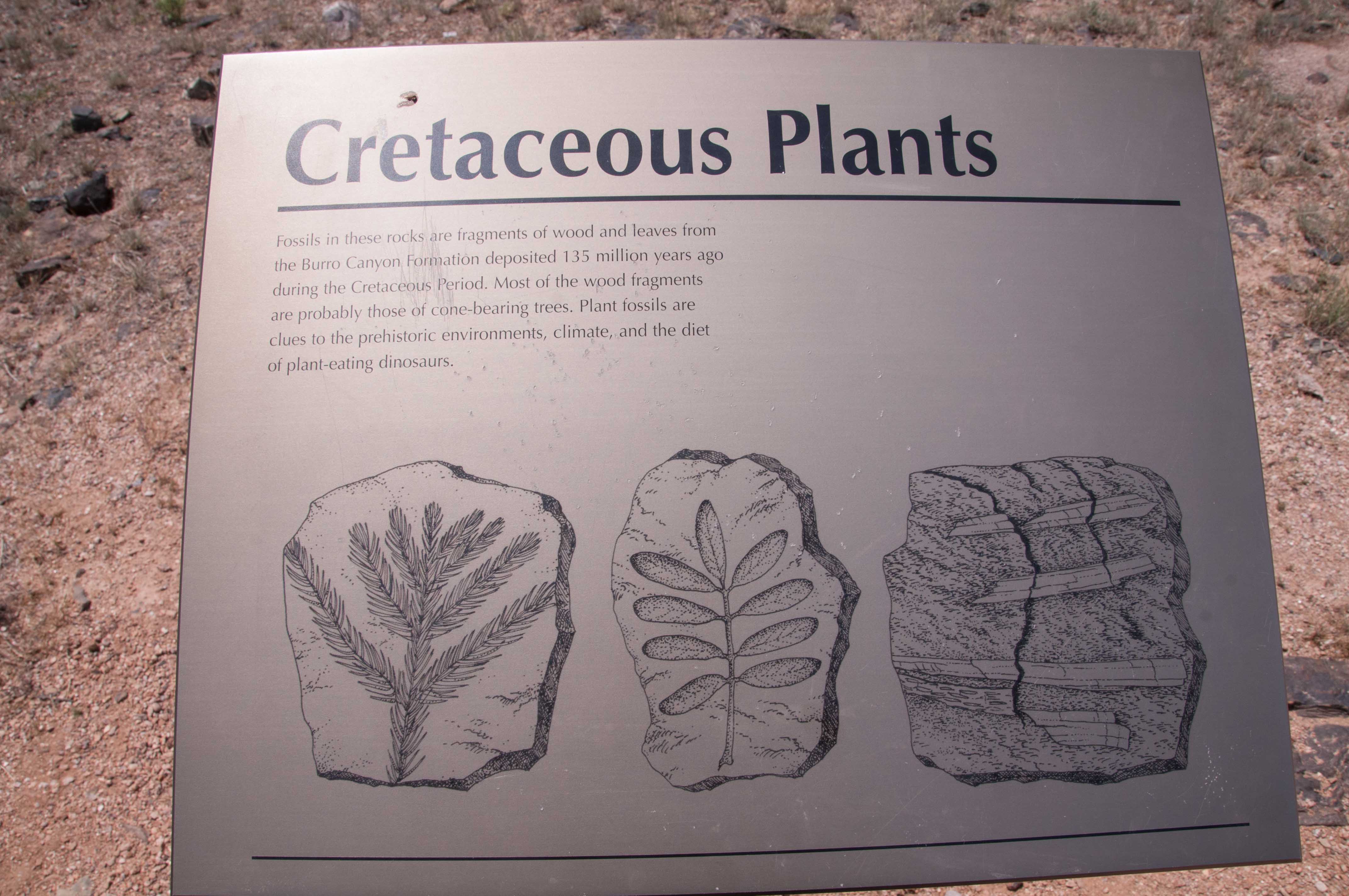 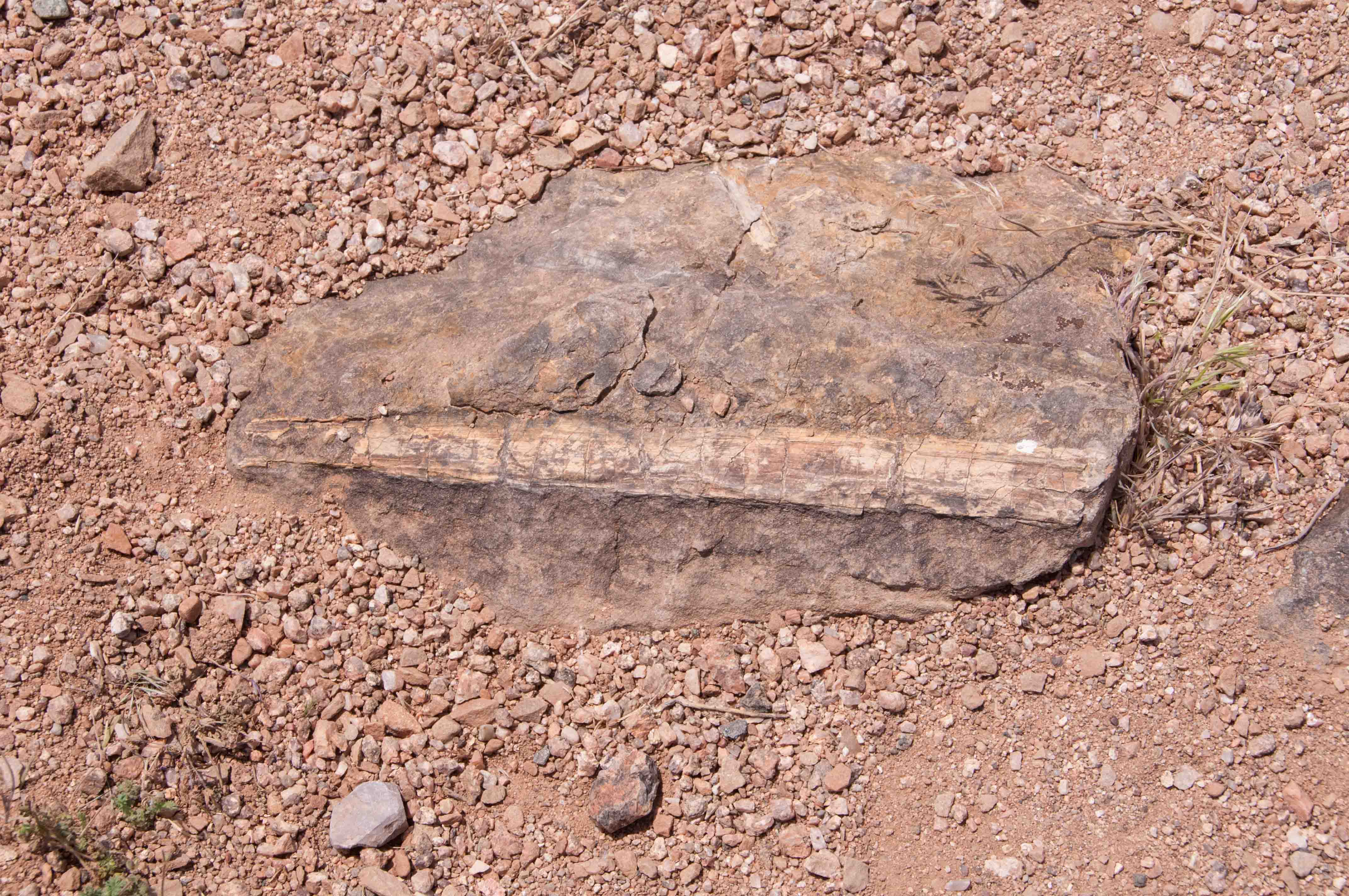 There is also fossilized vegetation in addition to the dinosaur fossils as can be gleaned from the sign on the left. The photo on the right is a fossilized stem.