Jurassic National Monument was designated by the John D. Dingell, Jr. Conservation, Management and Recreation Act on March 12, 2019. This act expanded the Cleveland-Lloyd Dinosaur Quarry and visitor center to an 850-acre national monument. The centerpiece of the park is Cleveland-Lloyd Dinosaur Quarry that contains the densest concentration of Jurassic dinosaur fossils ever found. The quarry is located at an elevation of 5800 feet in the San Rafael Swell, a part of the Morrison Formation.

There are picnic tables and restrooms, but no potable water, so bring plenty. Pets are allowed outside on leash. A couple of short hikes showcase rock art, dinosaur excavations, scenic views, and interesting geology. Jurassic National Monument is open daily during the summer, Thursday-Saturday during the spring and fall, and is closed from the end of October to mid-March. There is a small entrance fee that is covered by most national park passes.

I got to Jurassic National Monument by a really convoluted route; it's much easier to start from Price, UT. Take S Carbon Ave/UT Hwy 10 south from US Hwys 6/191 for 11.5 miles. Turn left on W Cleveland Rd/W Twin Peaks Rd to Elmo. Turn left on to Main Street in Elmo and continue for about 8 blocks. Turn right on S 800 E/S Desert Lake Drive and continue for 4.9 miles. Turn left on Dinosaur Quarry Road/Emery CR 216 and continue 6.2 miles to the quarry visitor center. There are signs for the national monument and quarry along the route. I visited the park in October of 2022. 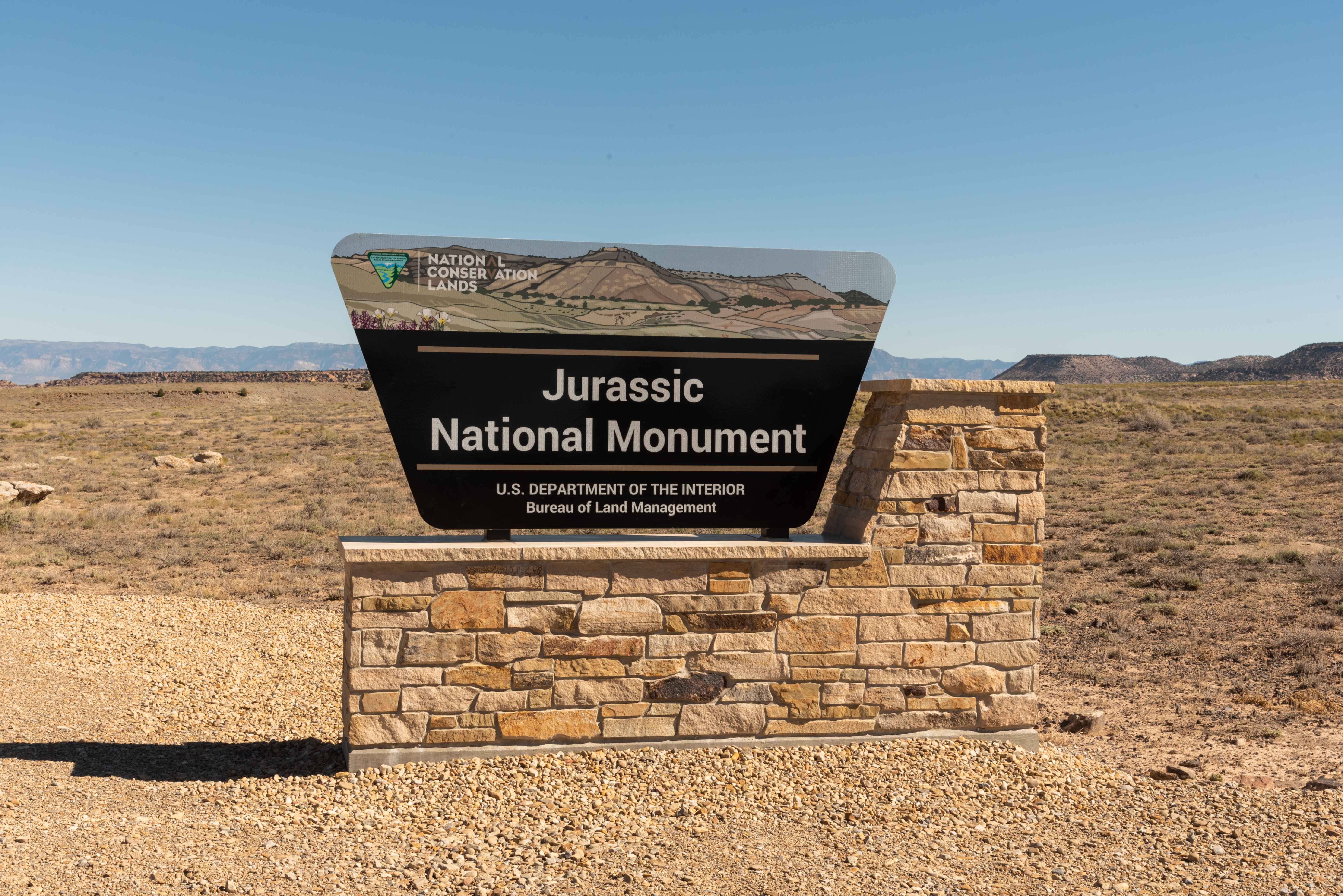 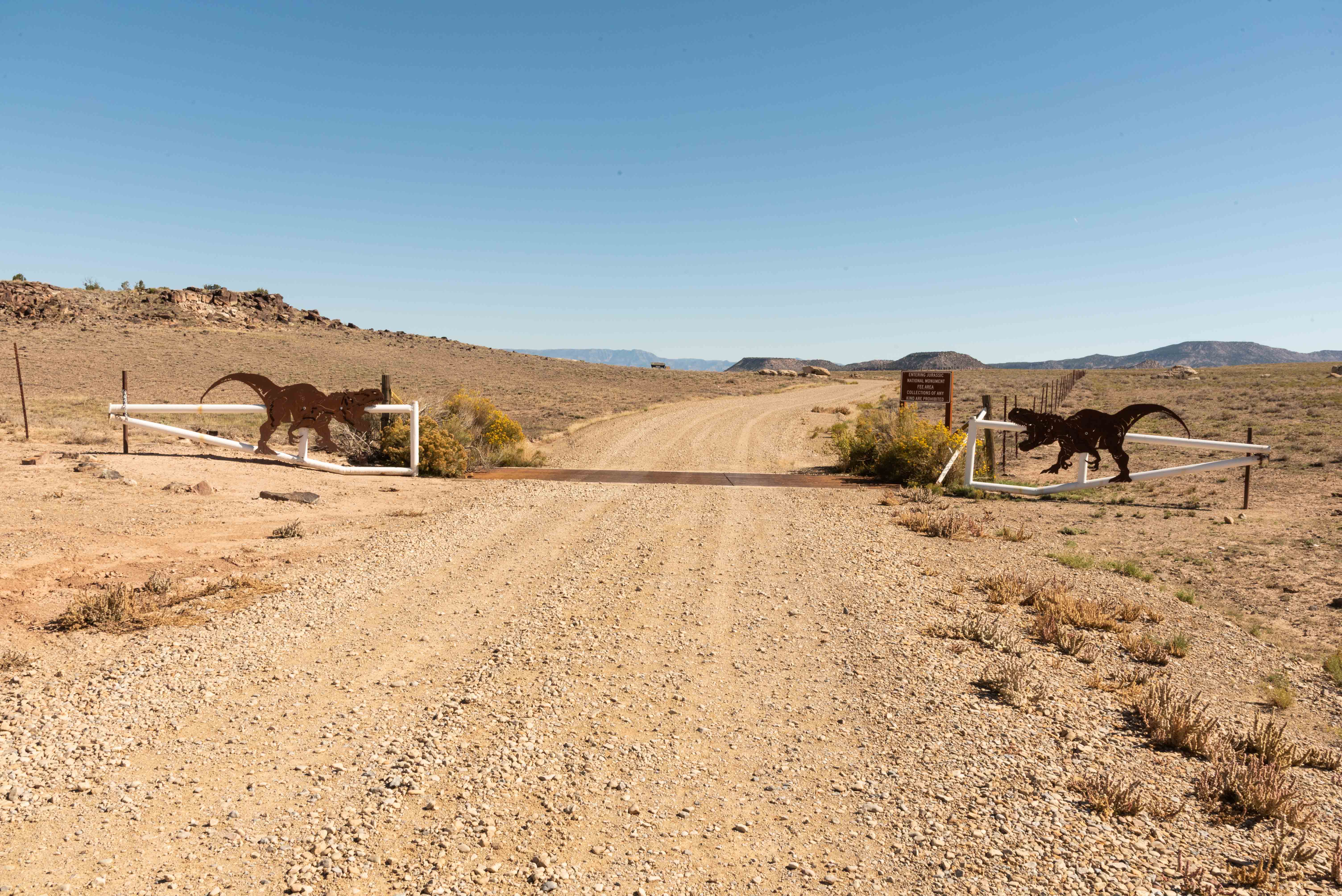 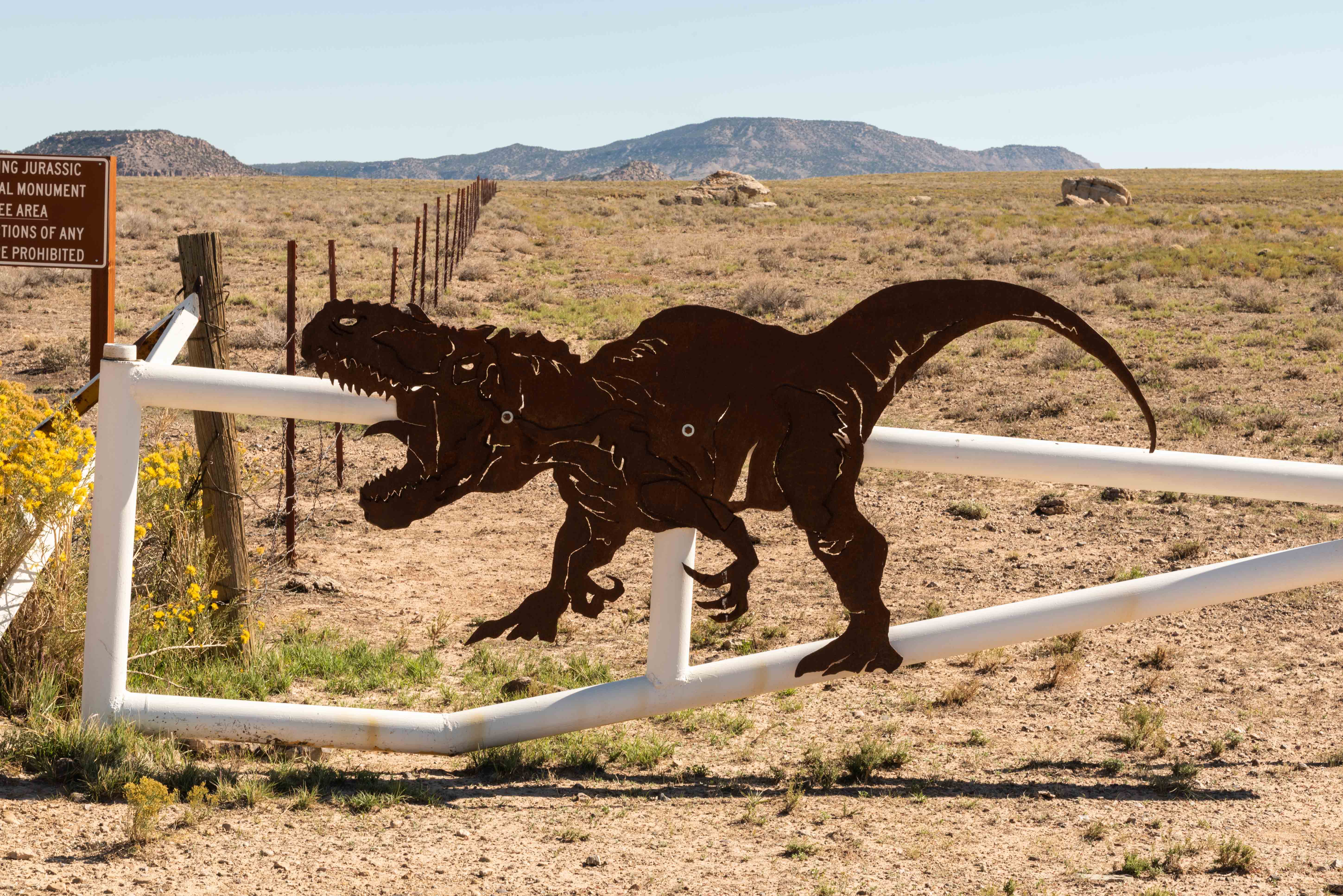 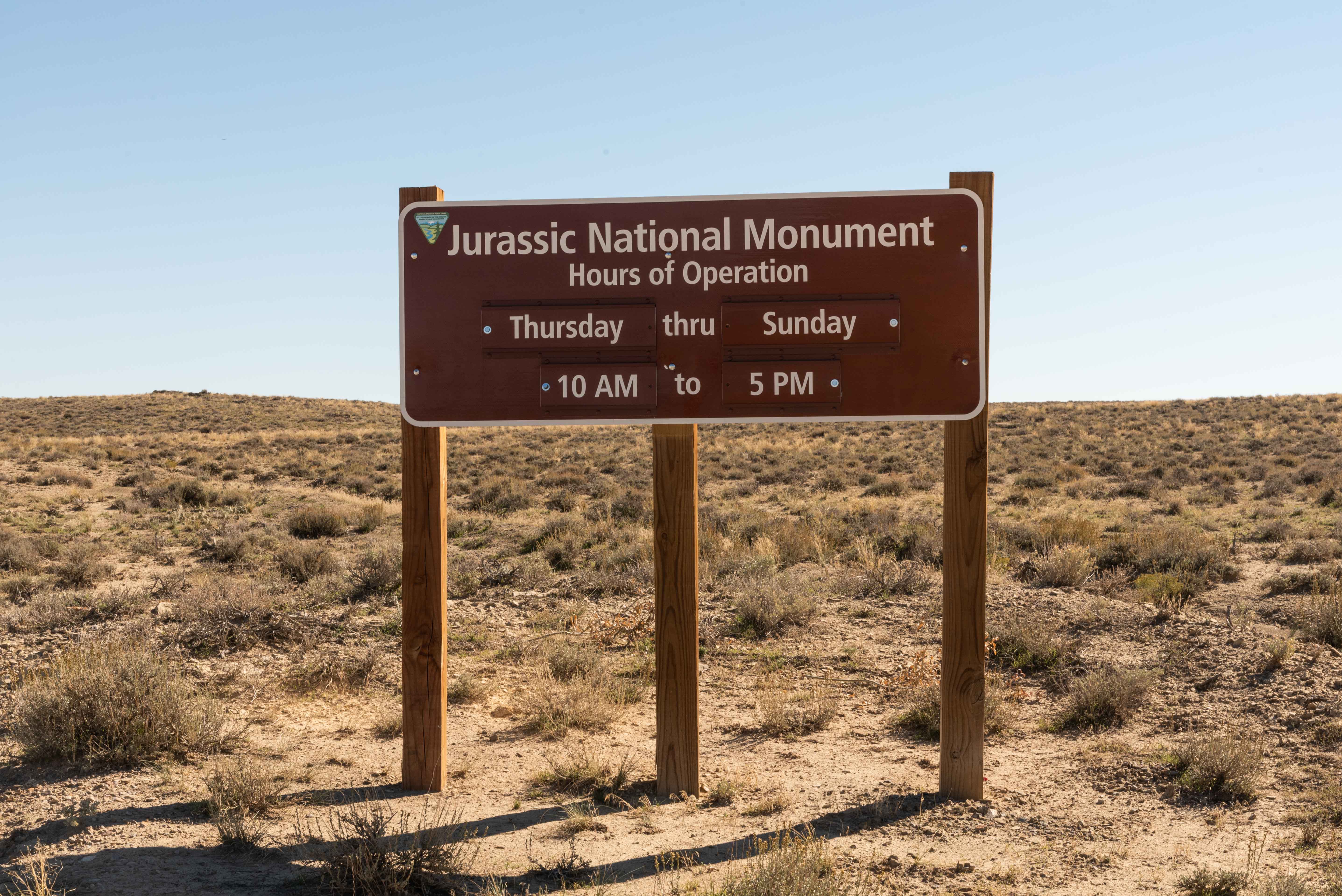 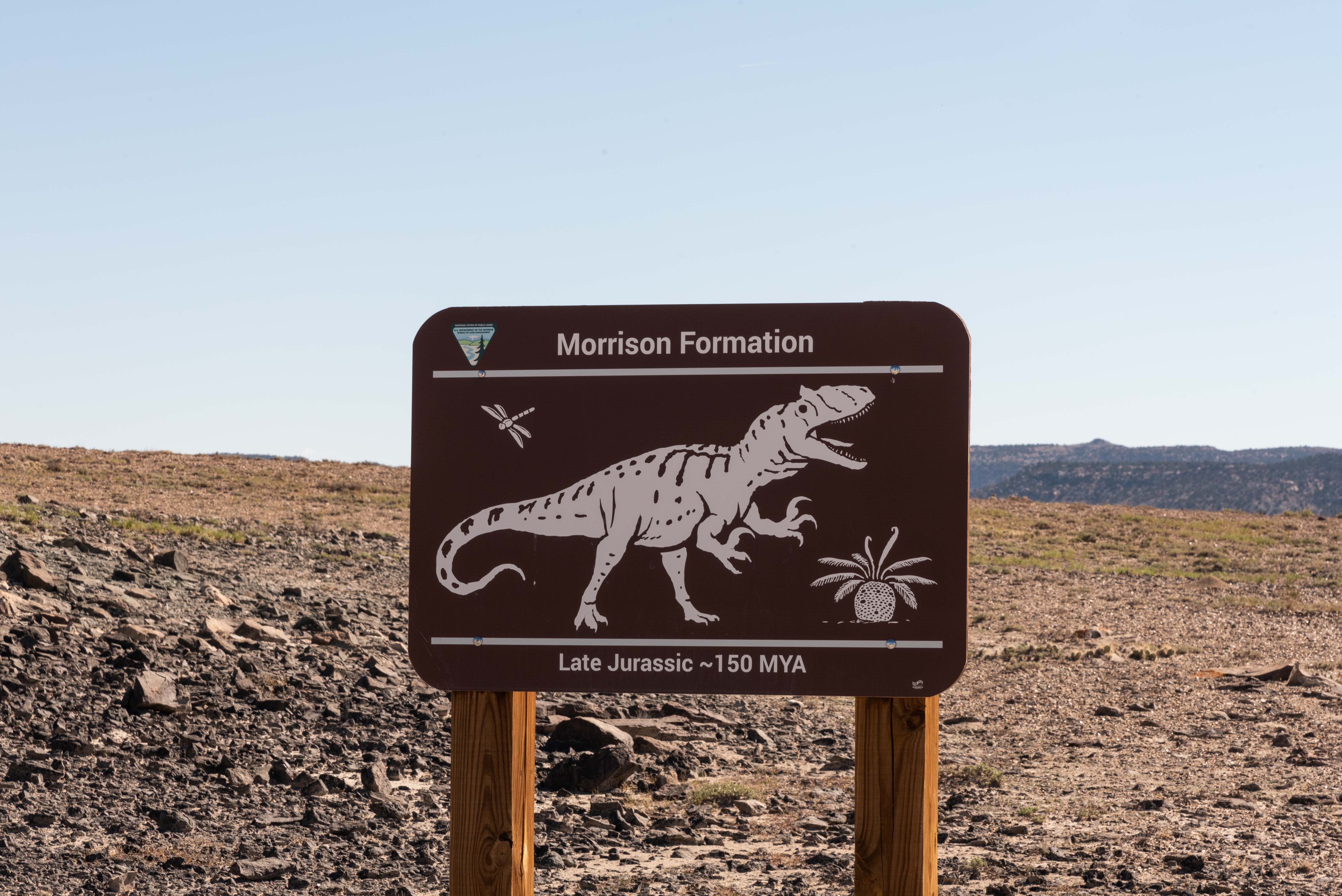 Jurassic National Monument is administered by the Bureau of Land Management. The renovated and expanded quarry visitor center was dedicated on April 28, 2007. It contains a small museum with displays, casts, and fossils of various dinosuars from the quarry. A complete, reconstructed skeleton of an adult Allosaurus is the star of the museum. The visitor center also has a small gift shop and book store. I liked the Allosaurus so much that I've included three shots of him/her from different angles. Very photogenic! 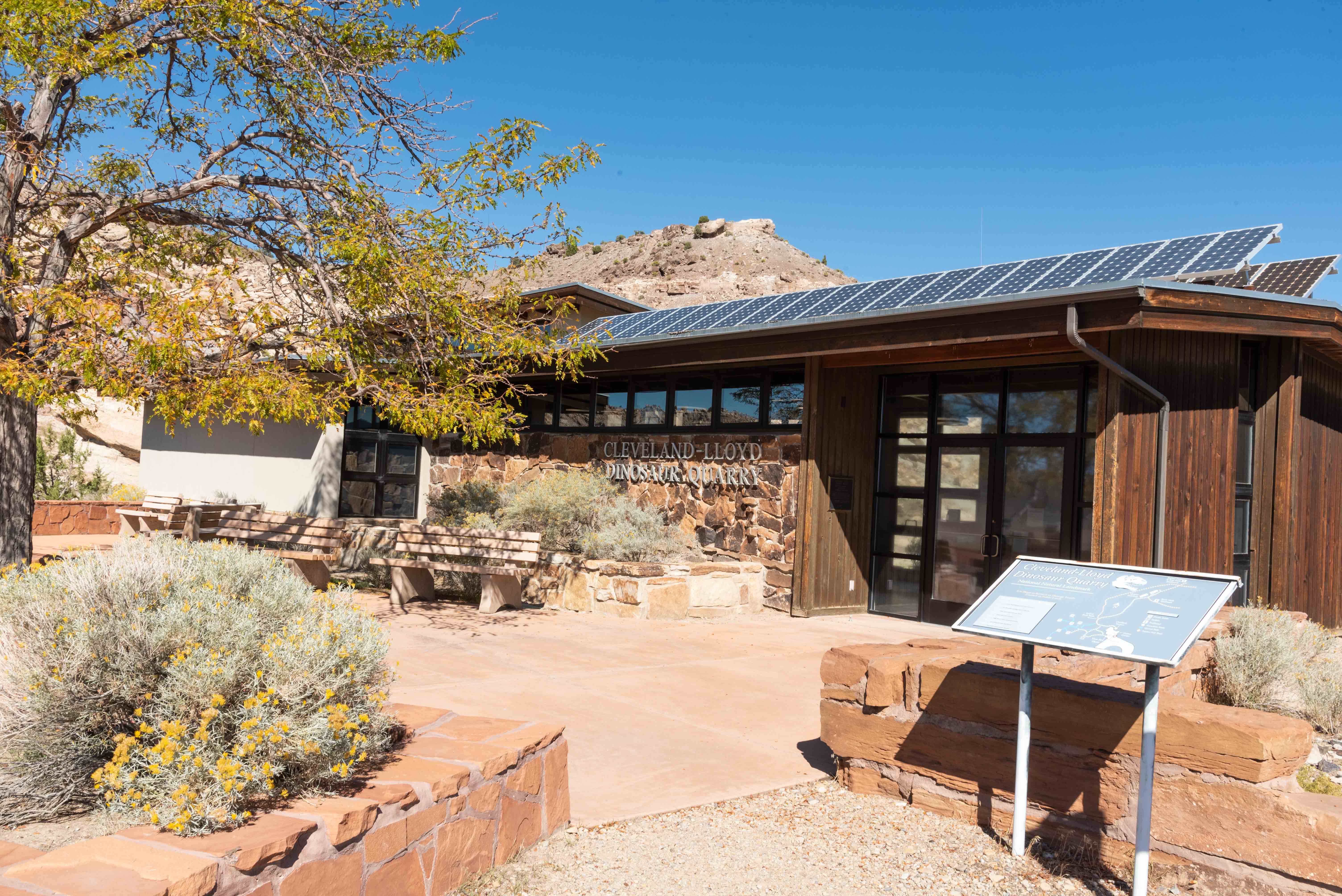 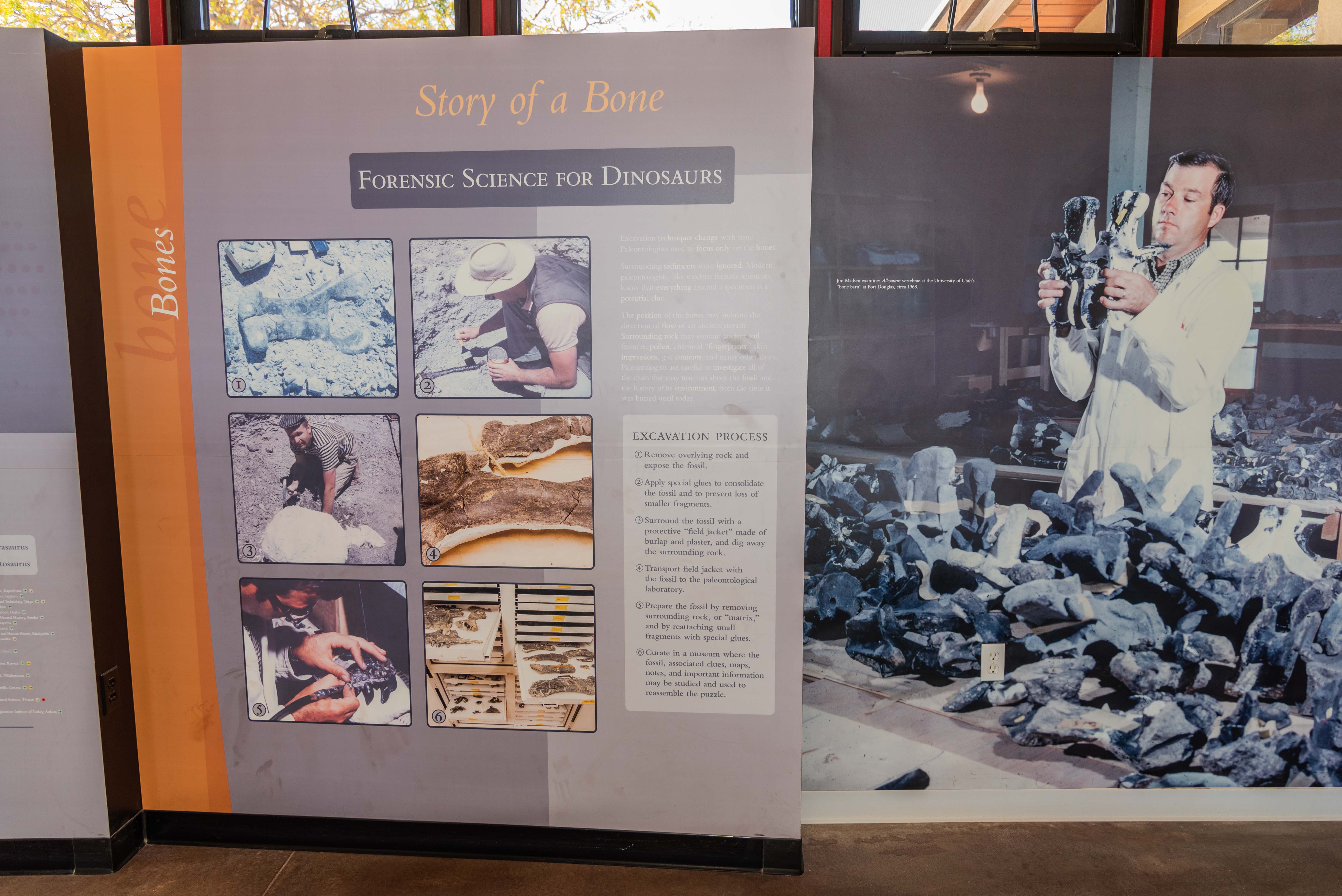 Story of a Bone 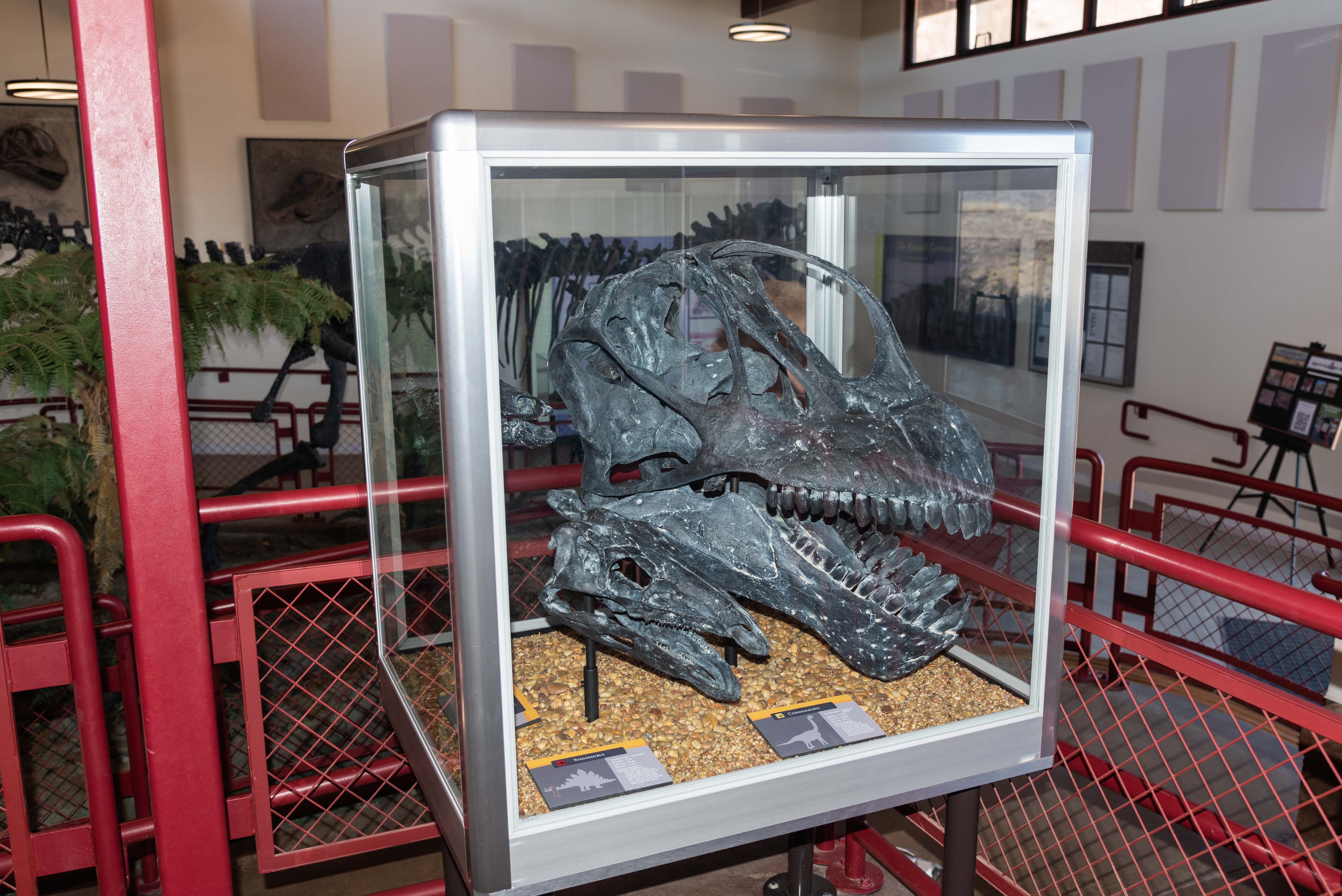 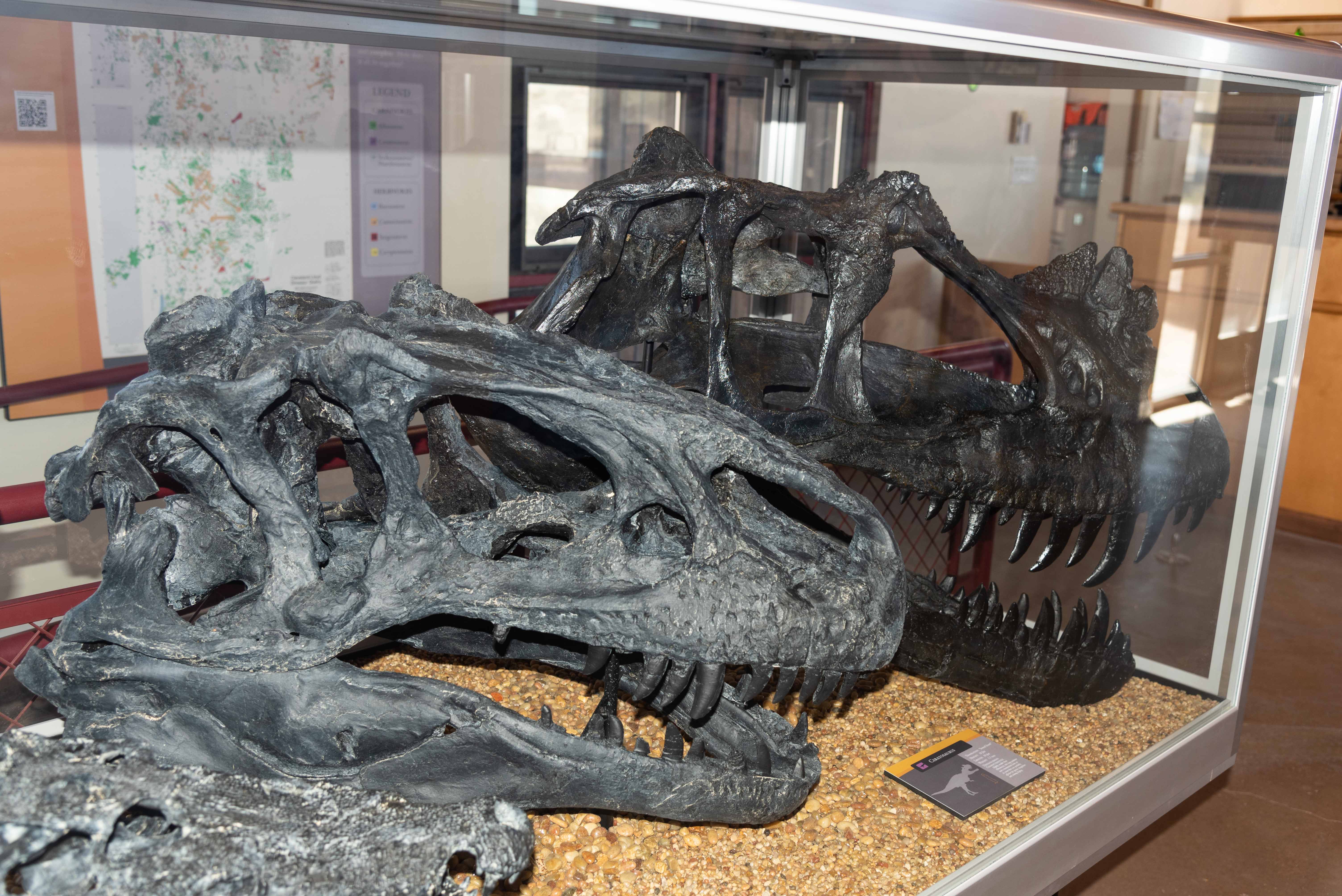 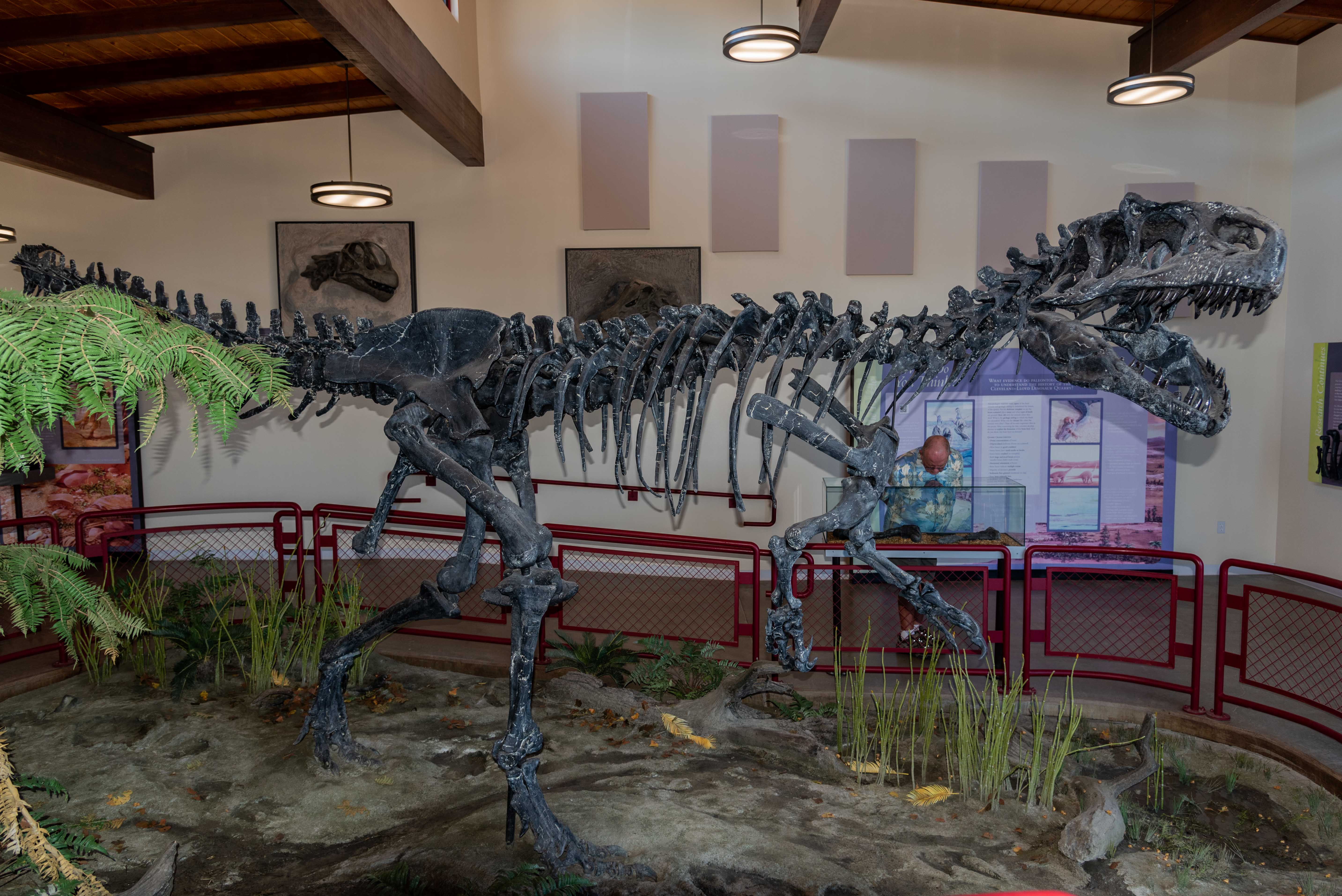 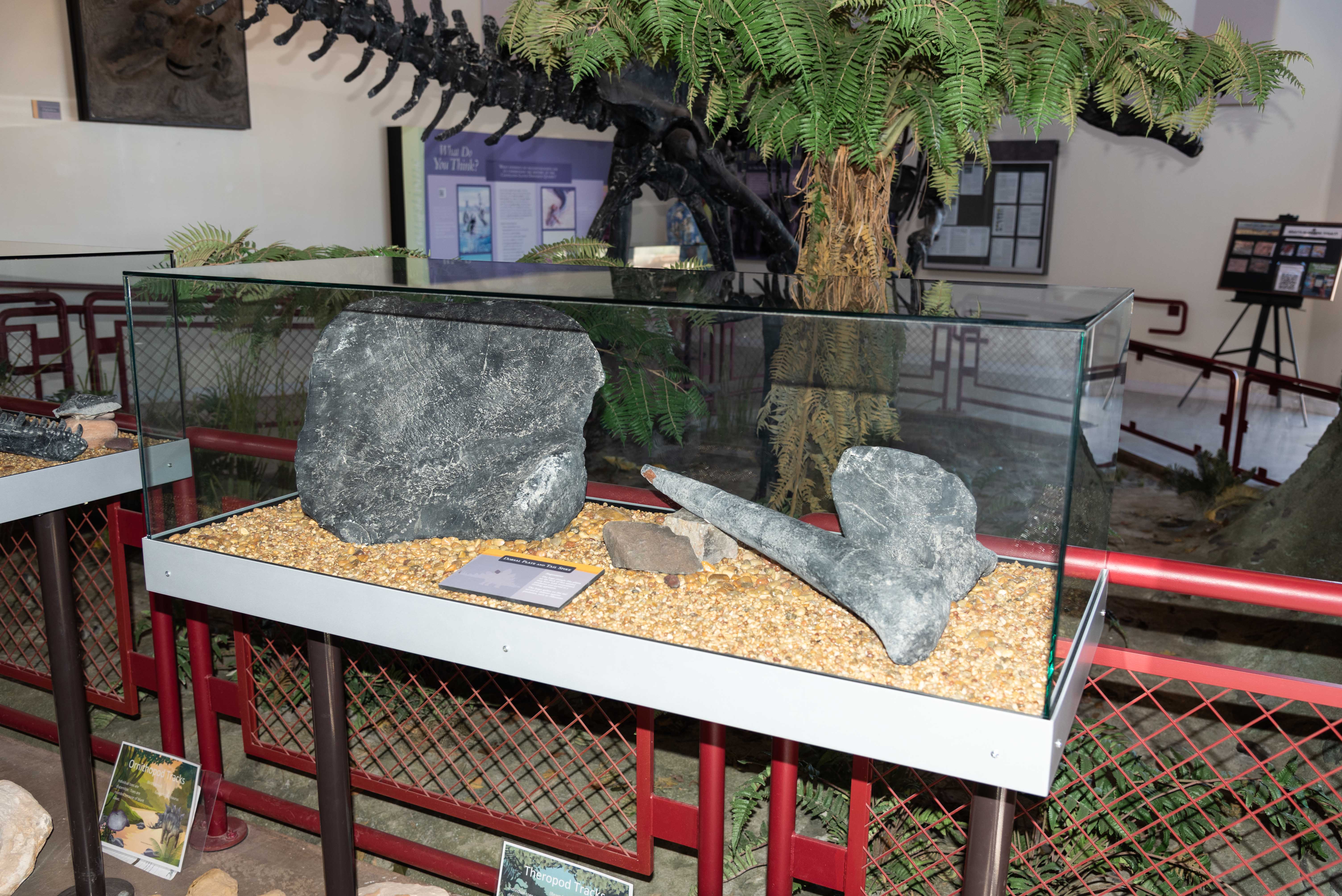 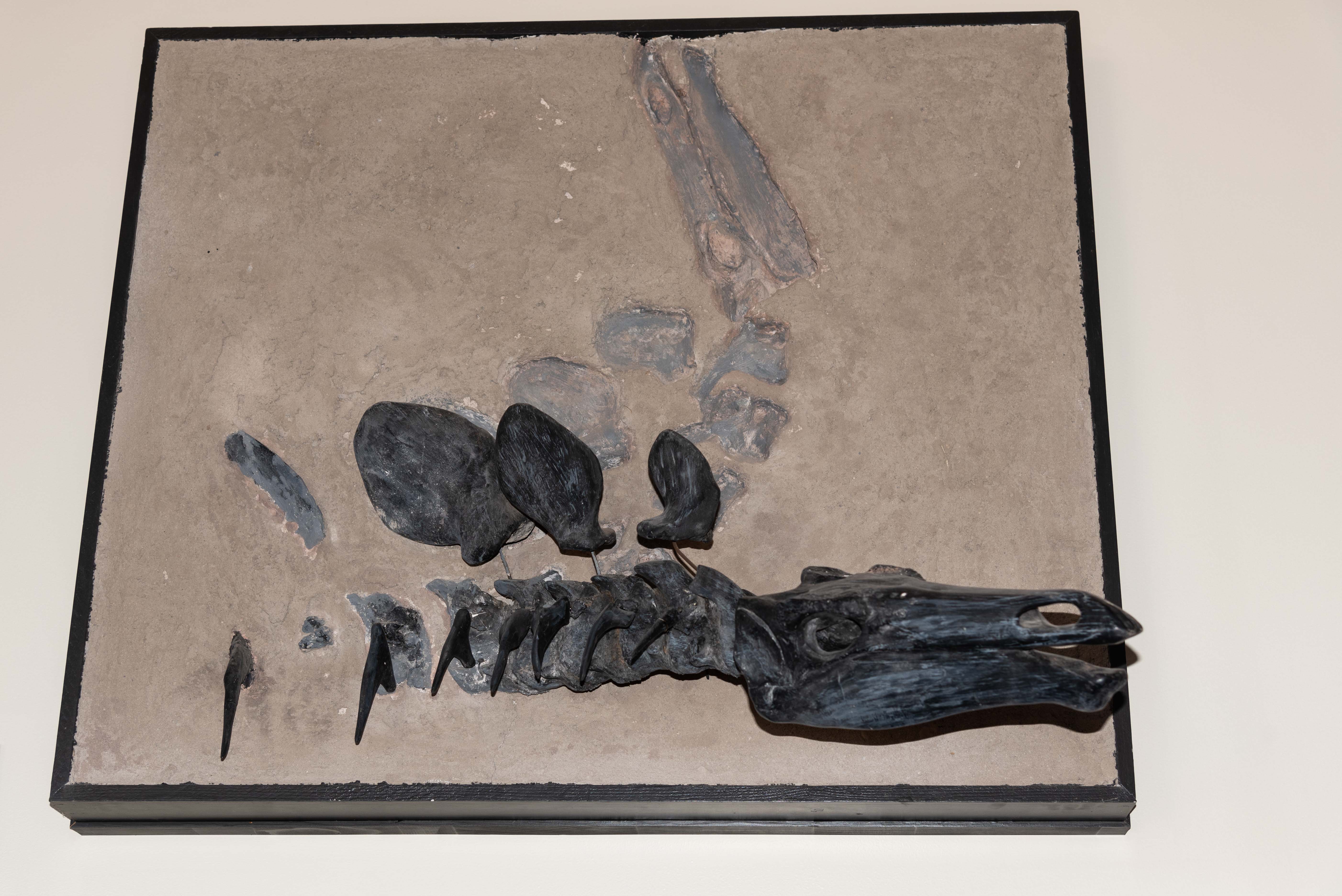 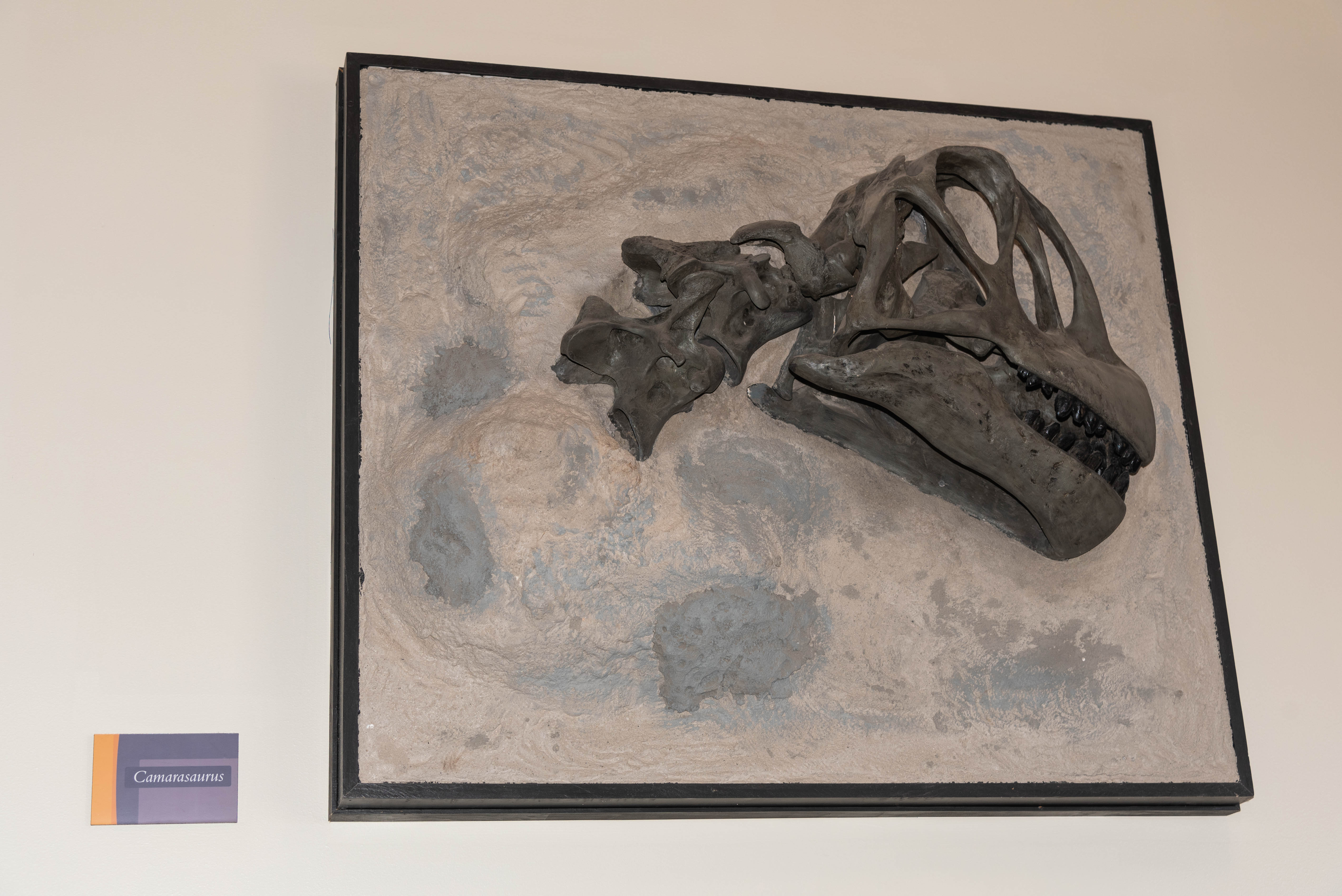 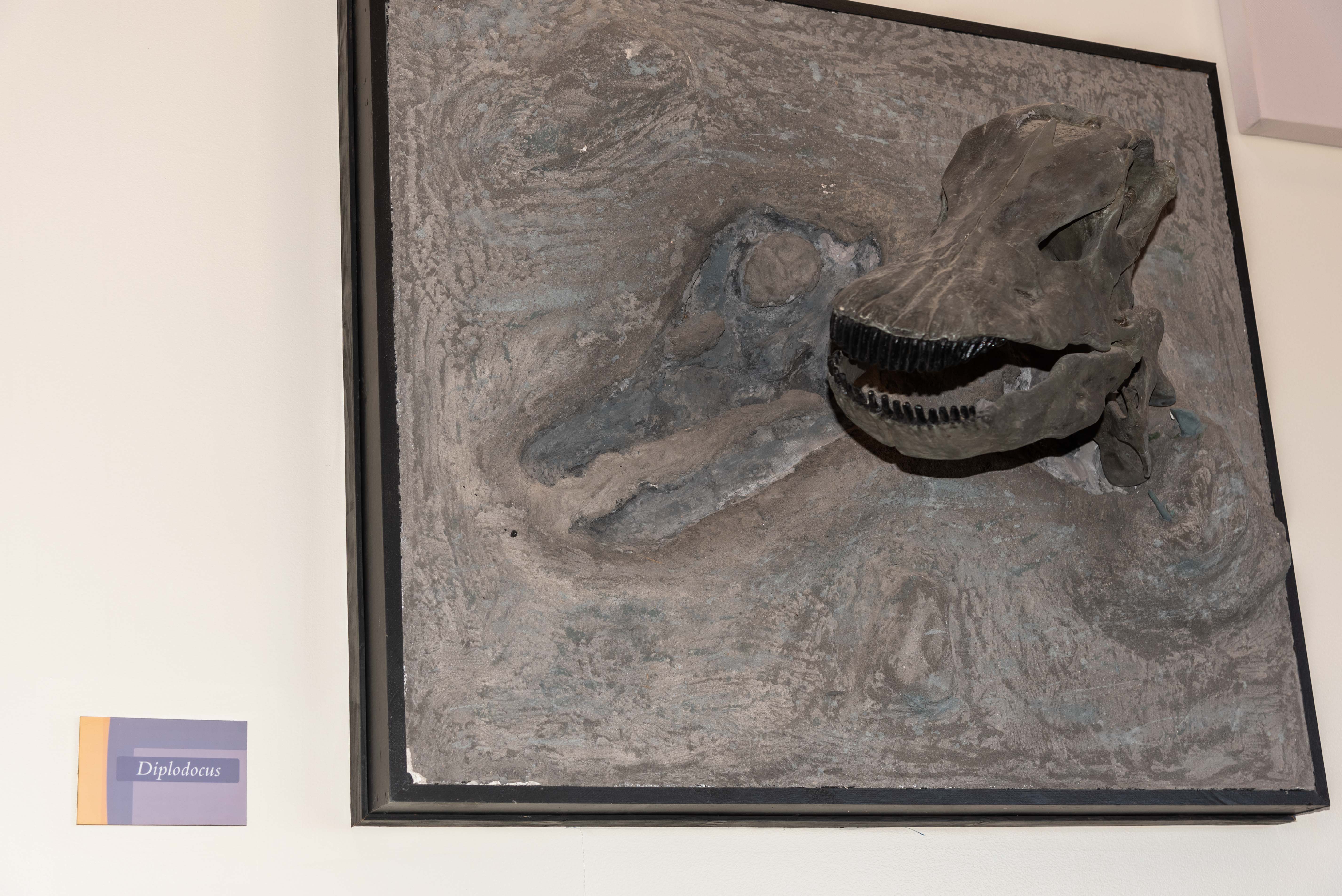 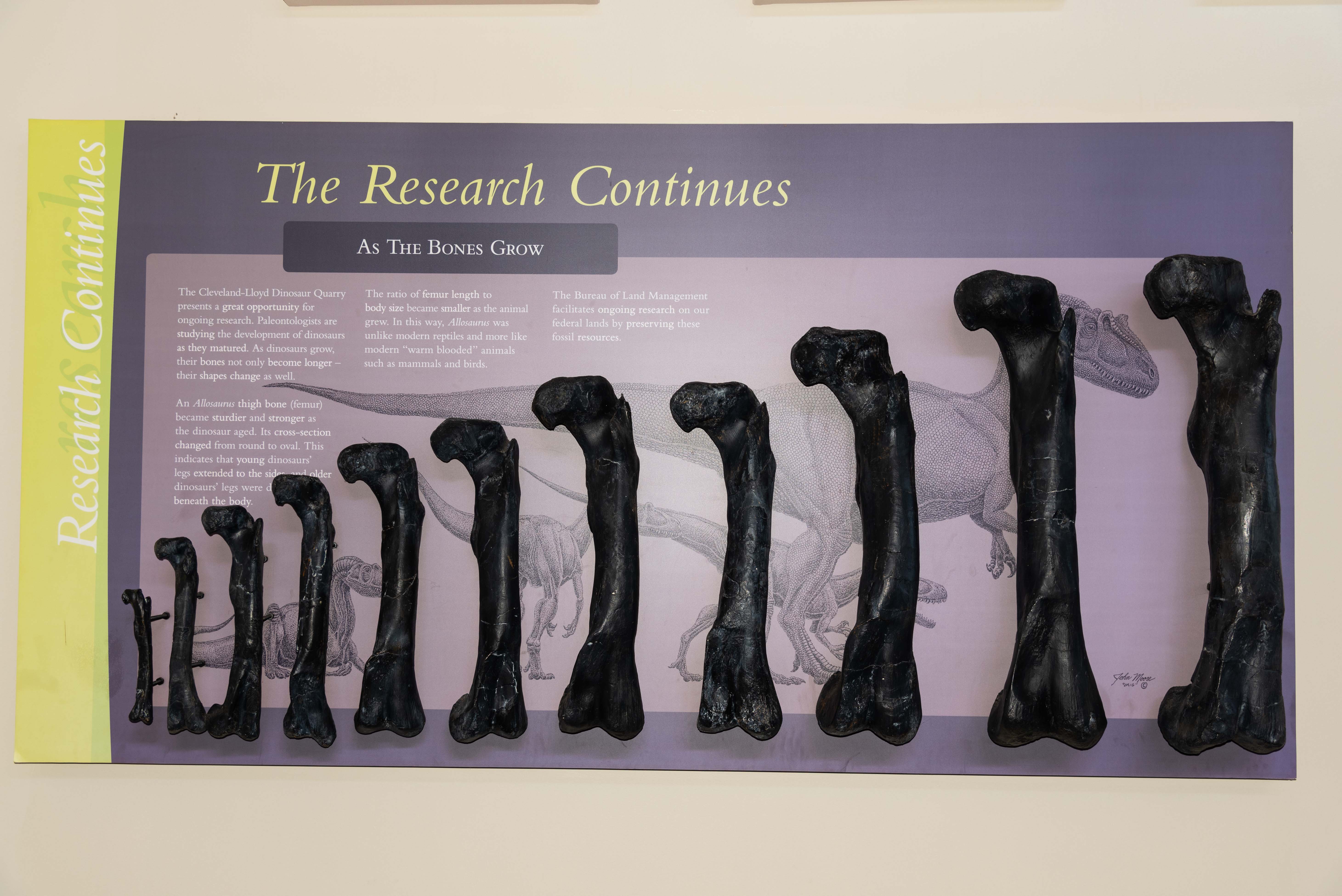 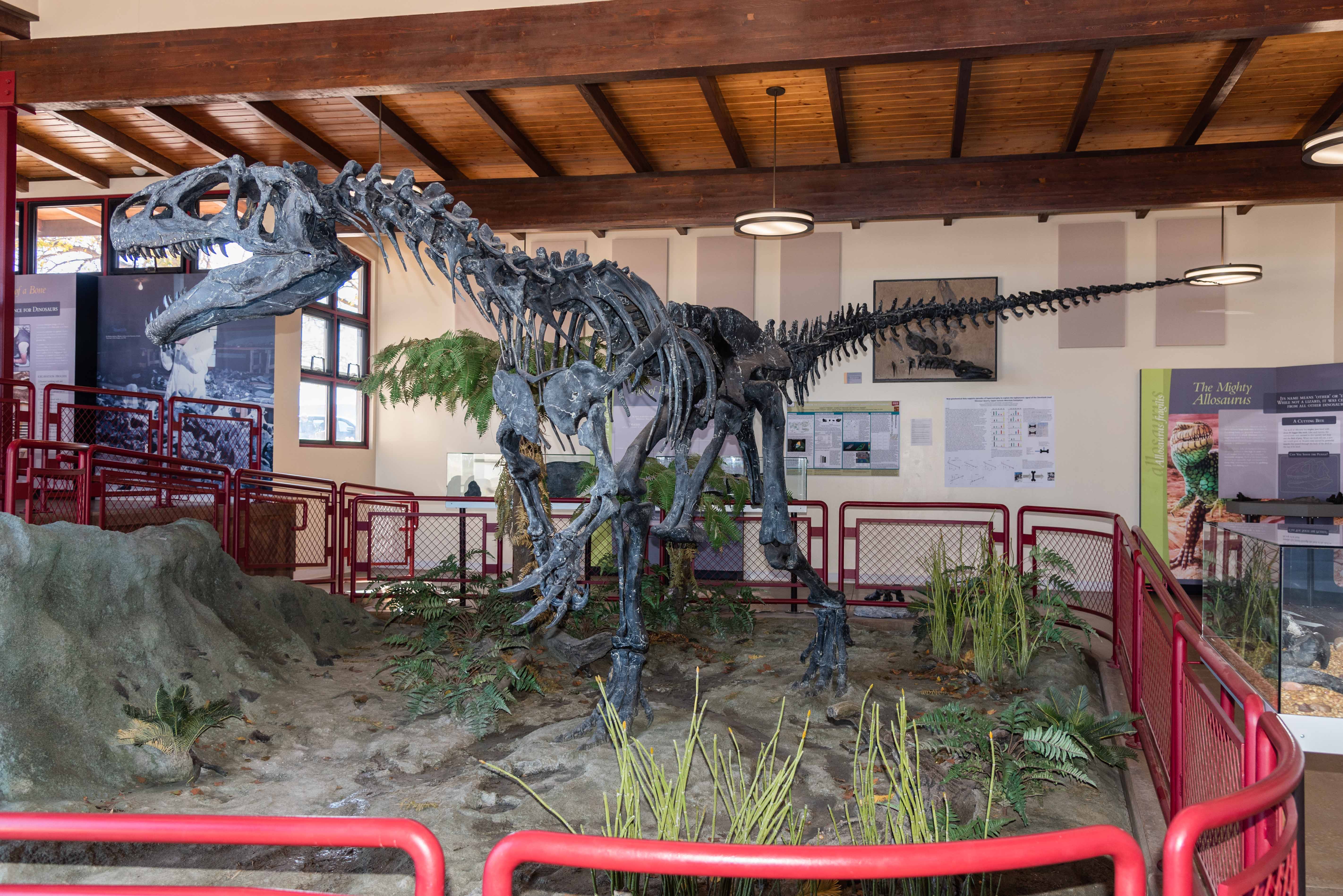 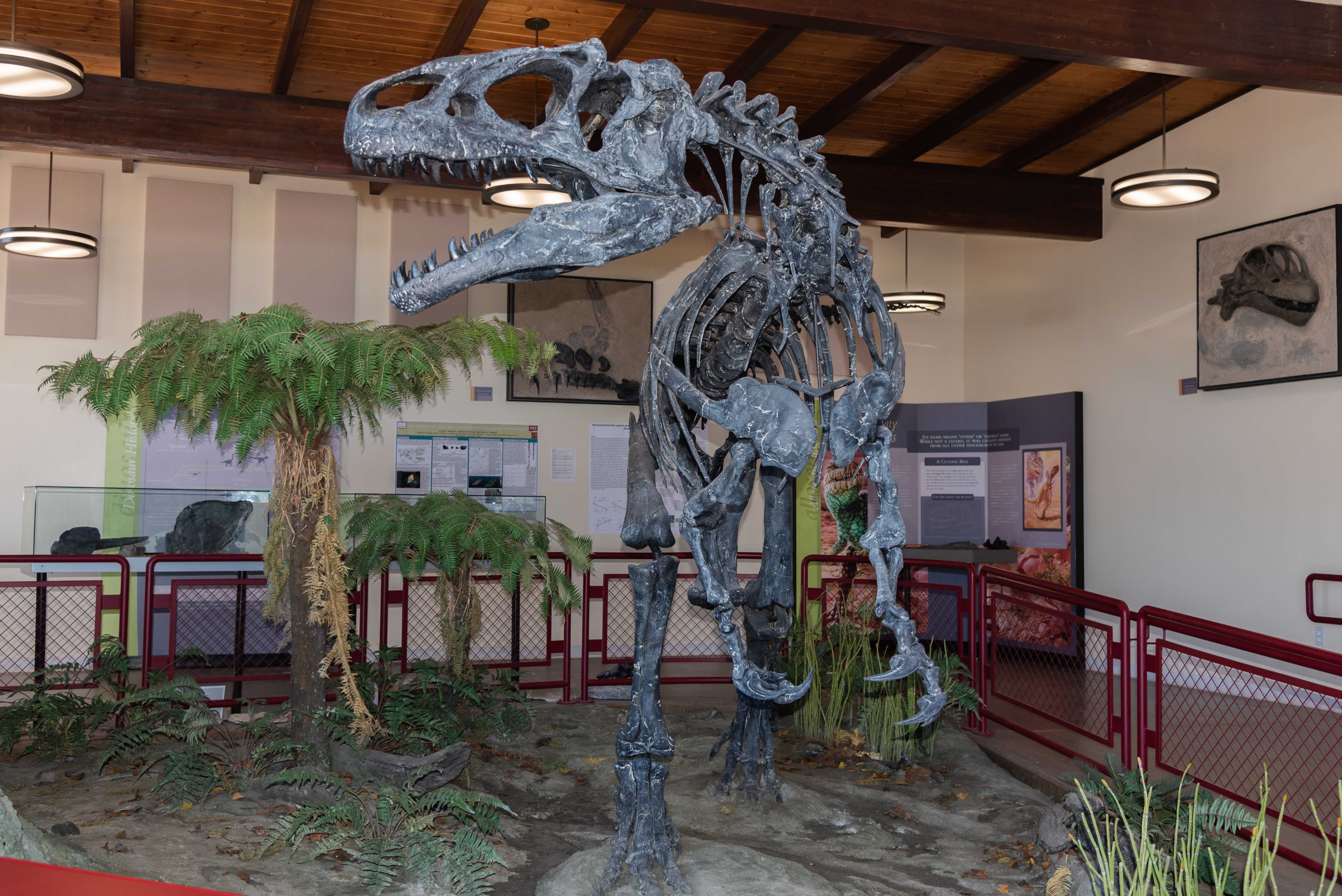 The Cleveland-Lloyd Dinosaur Quarry contains the densest concentration of Jurassic dinosaur bones ever found. Over 12,000 bones from at least 74 individual dinosaurs have been excavated at the quarry. More than three-quarters of the bones belong to carnivores, primarily Allosaurus fragilis. This is kind of a paleological conundrum, since prey usually outnumber predators by a significant amount. With 46 individual specimens of Allosaurus to study, scientists have learned a lot about aging and diversity among these theropods. 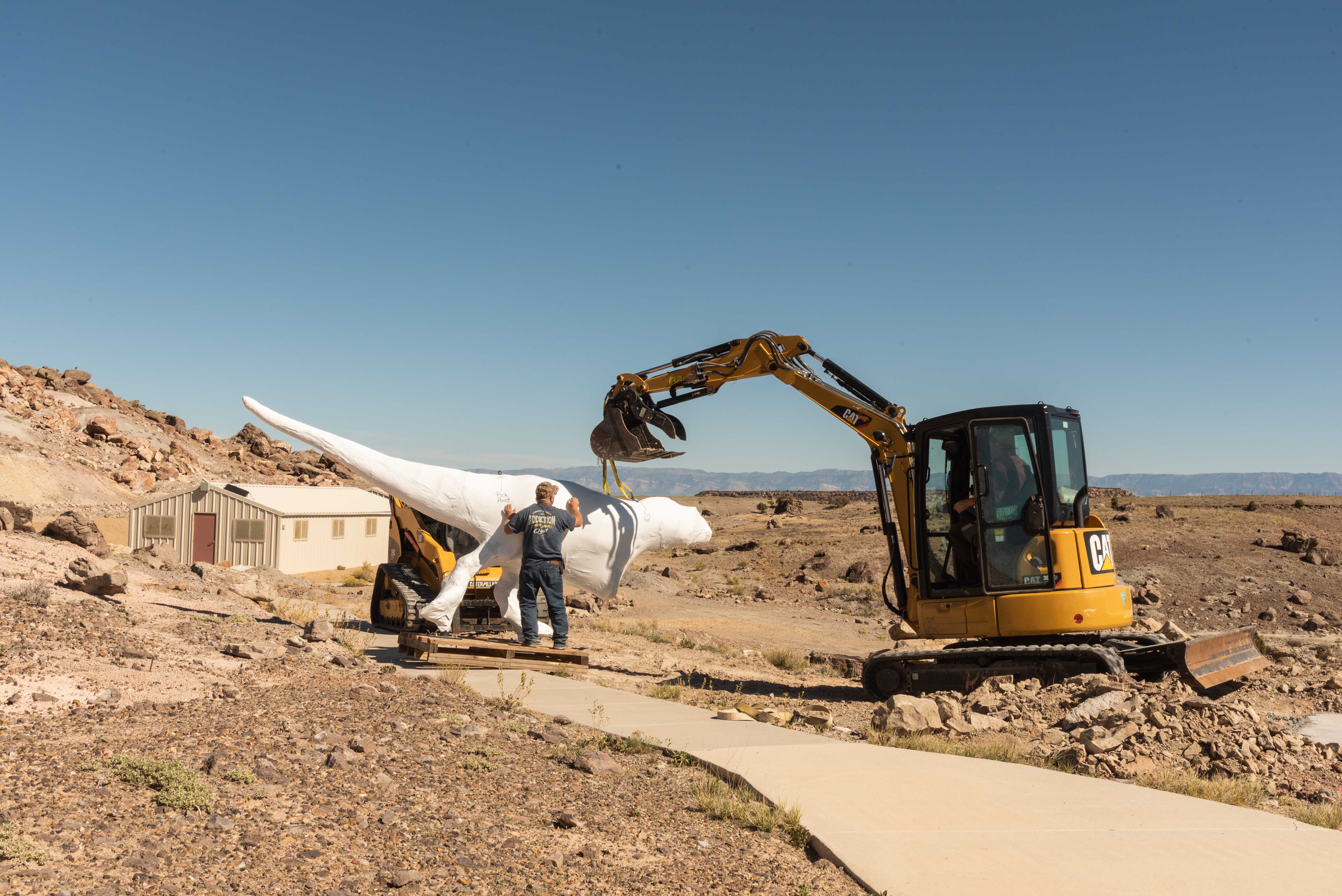 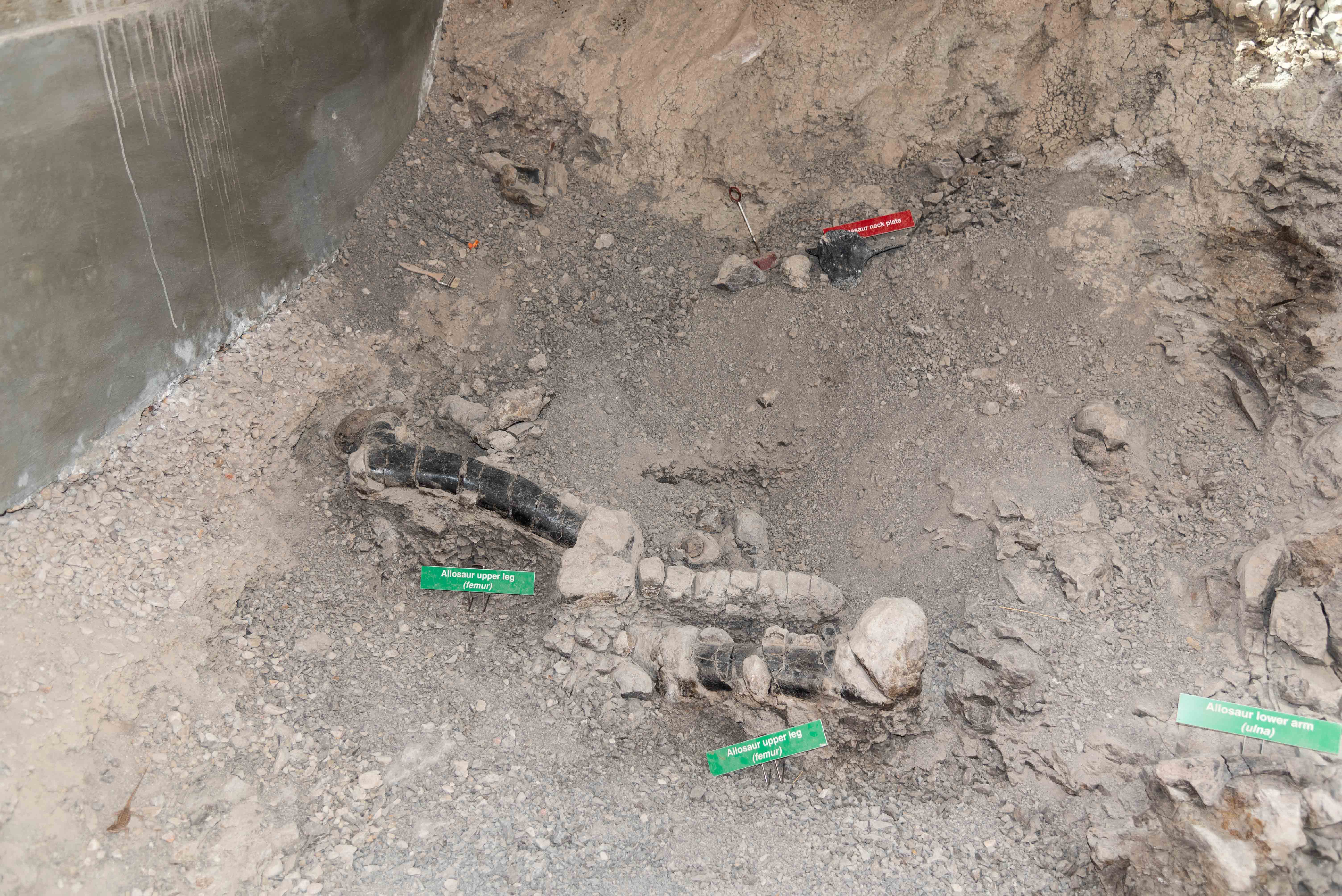 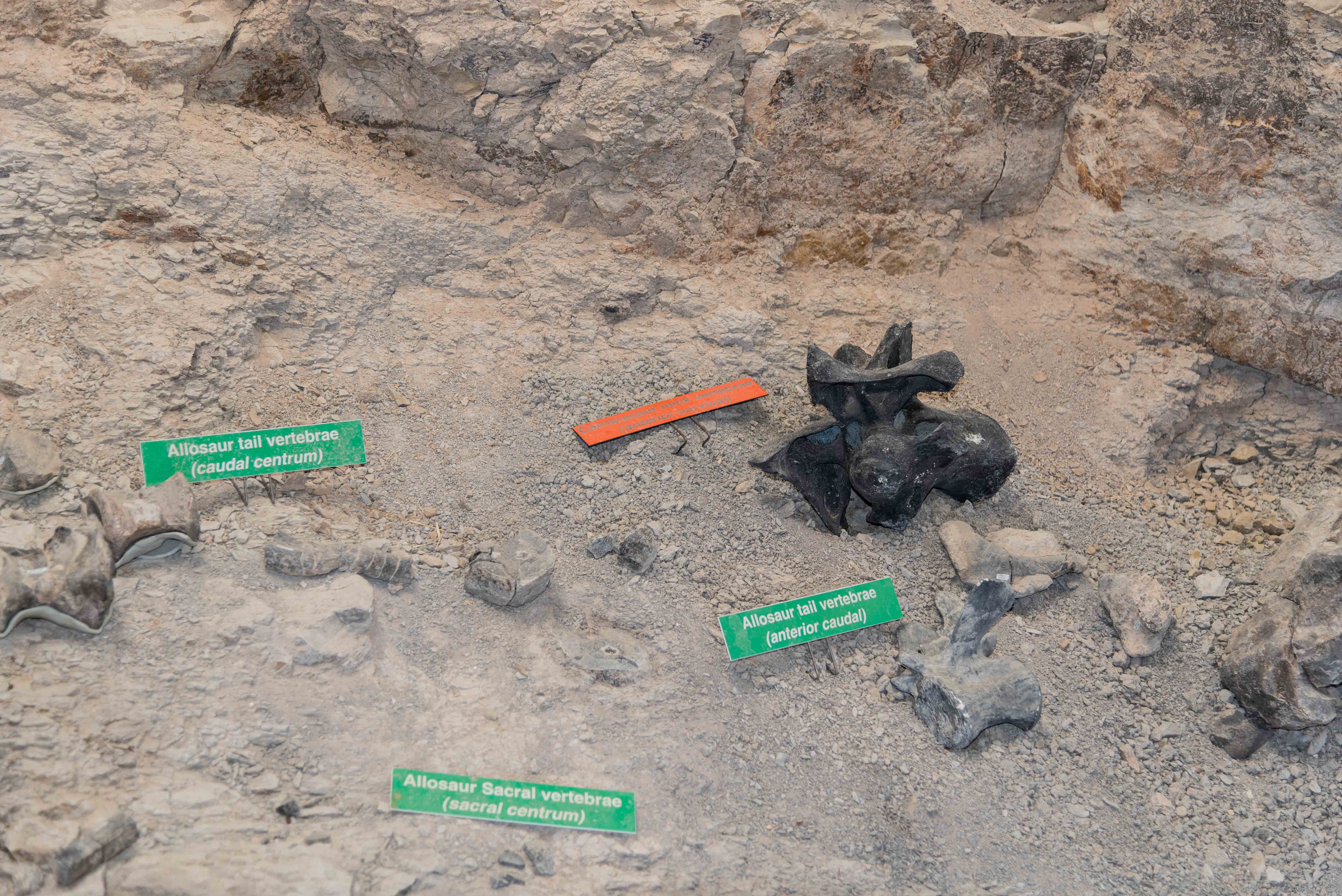 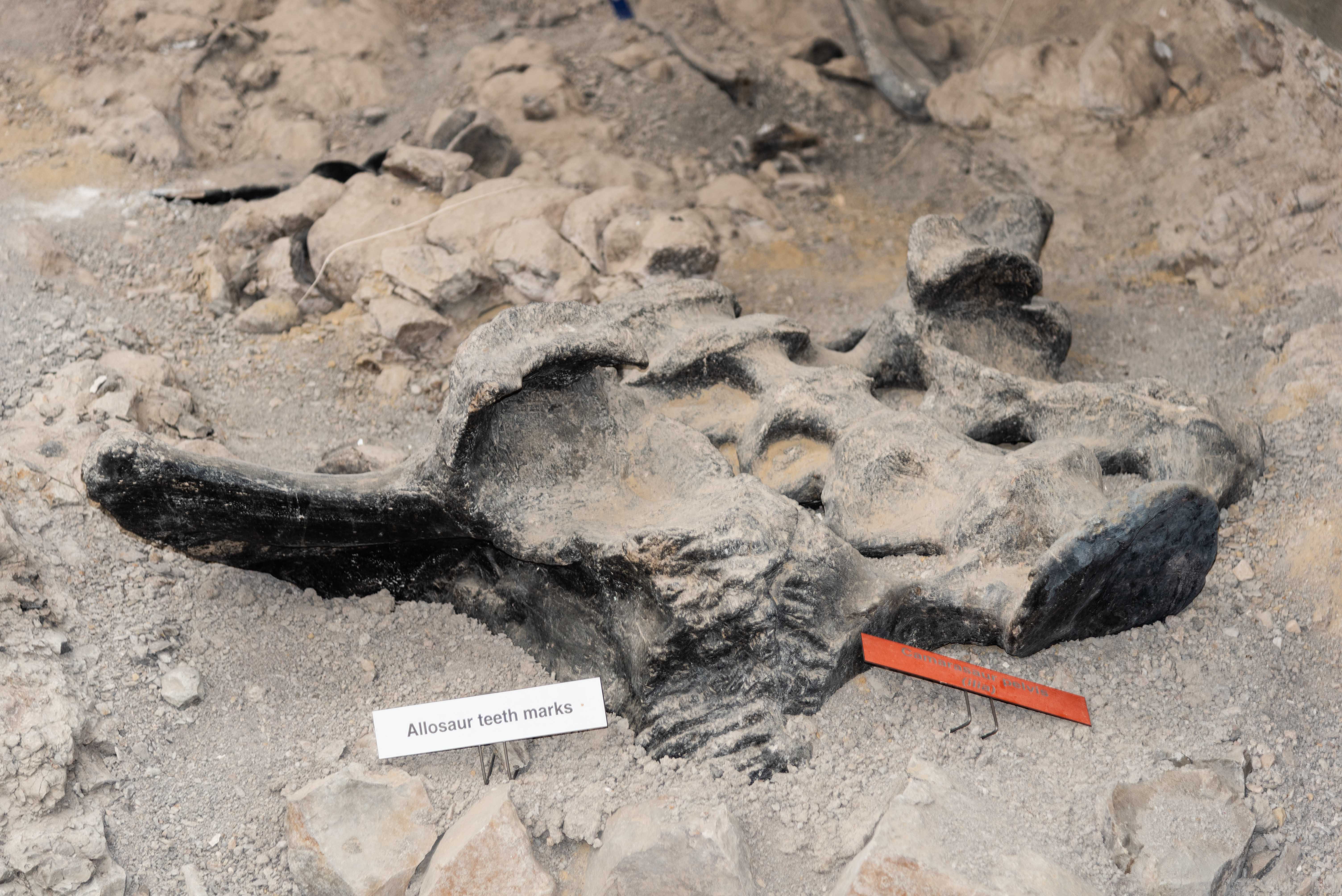 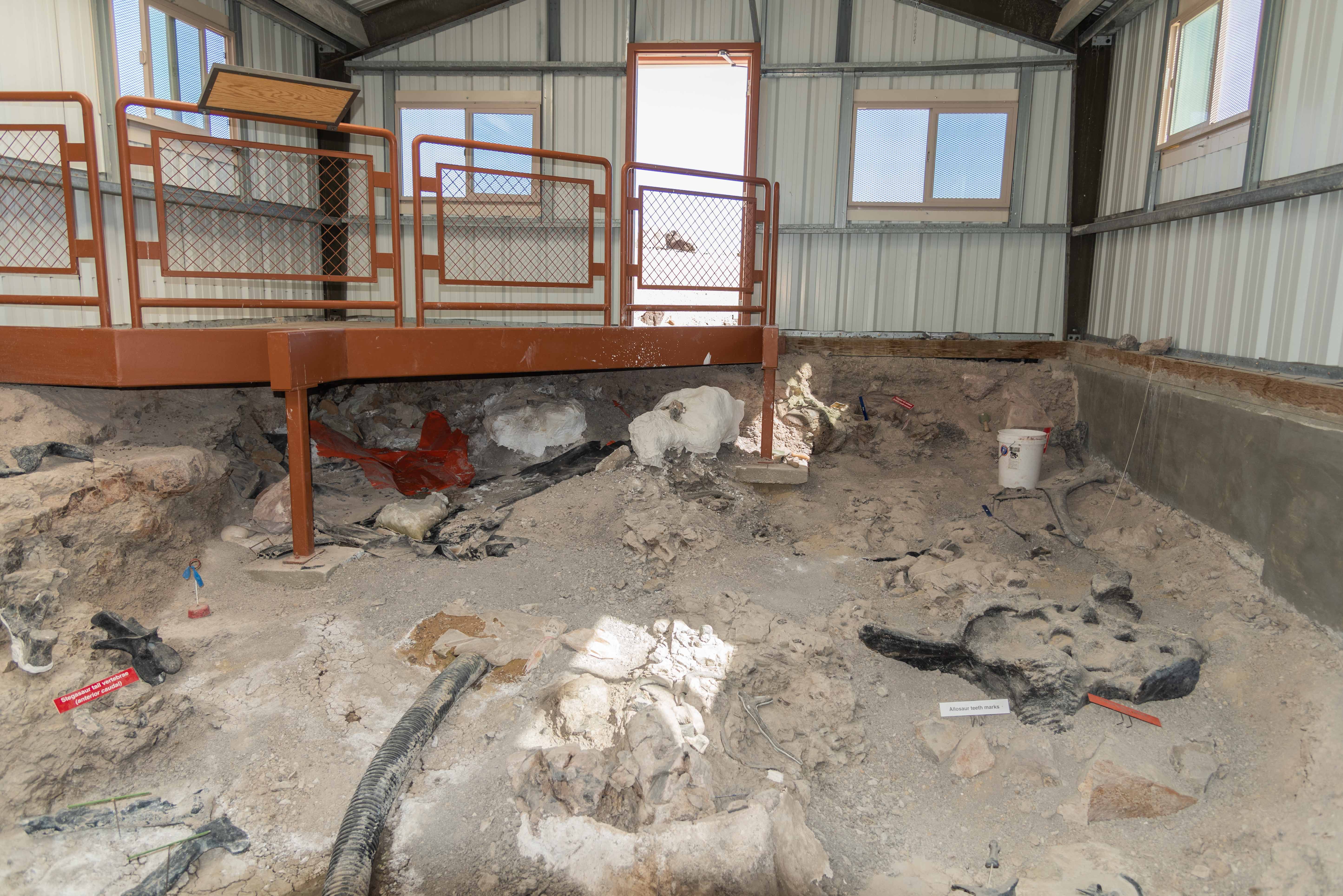 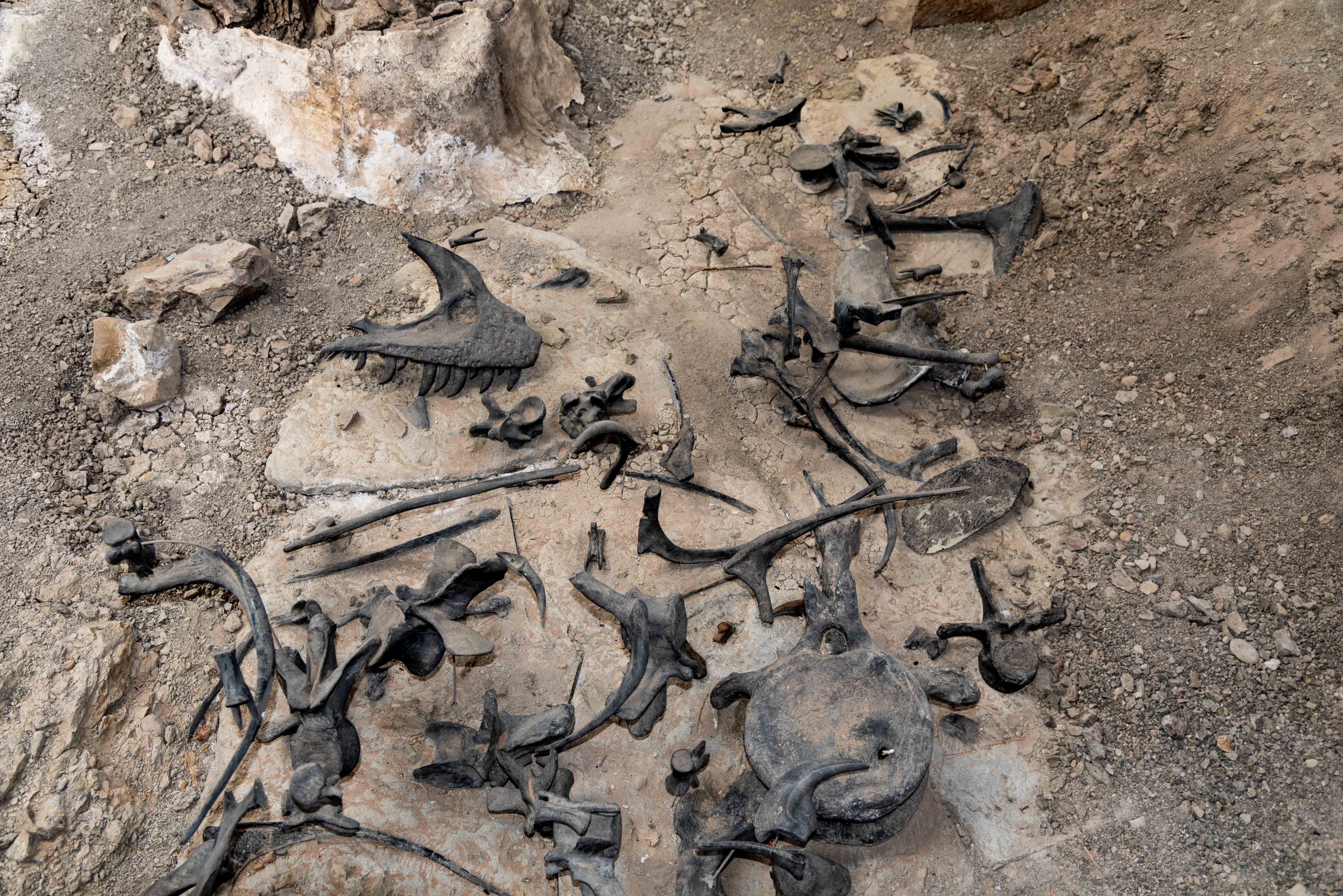 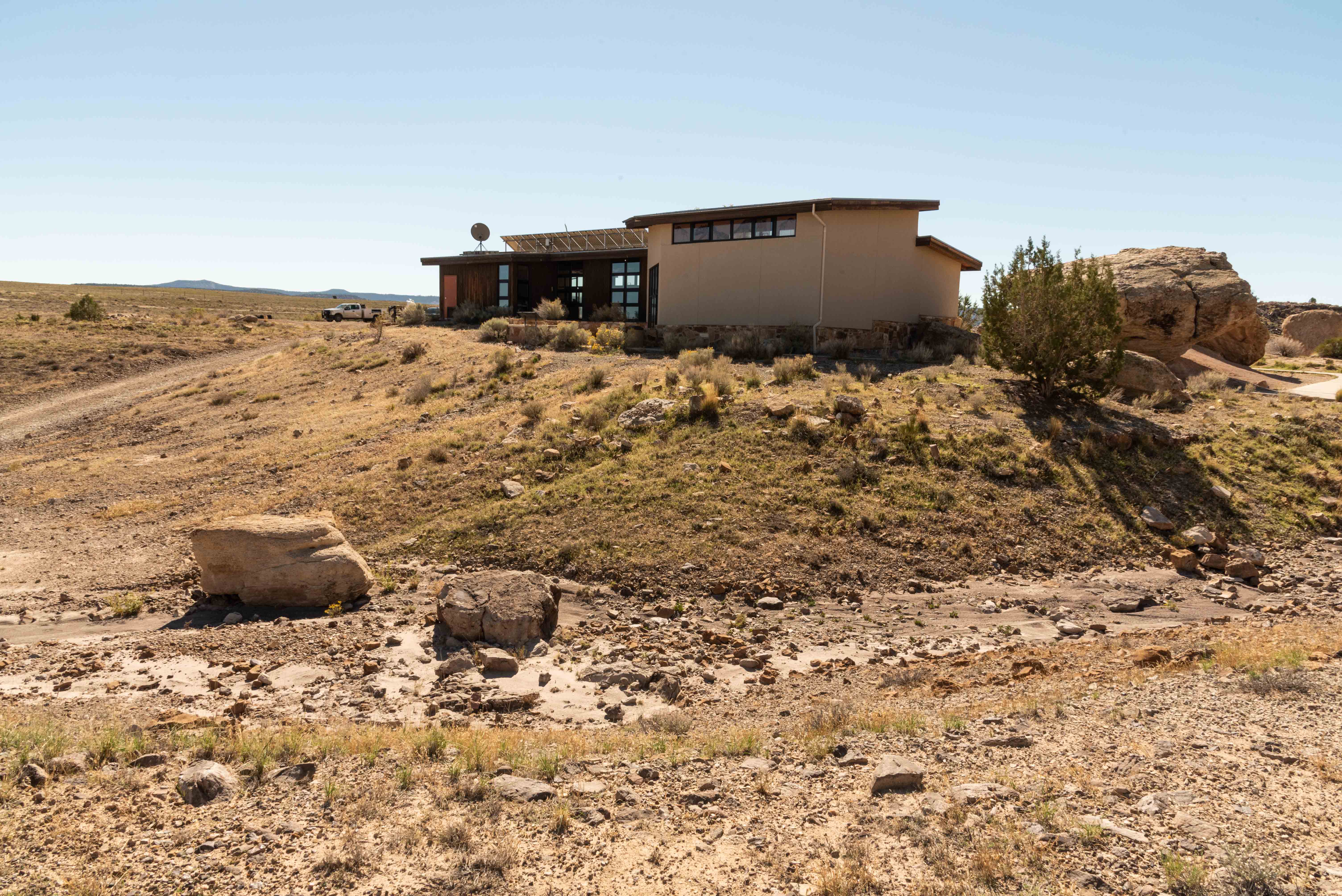 Visitor center - view from the quarry 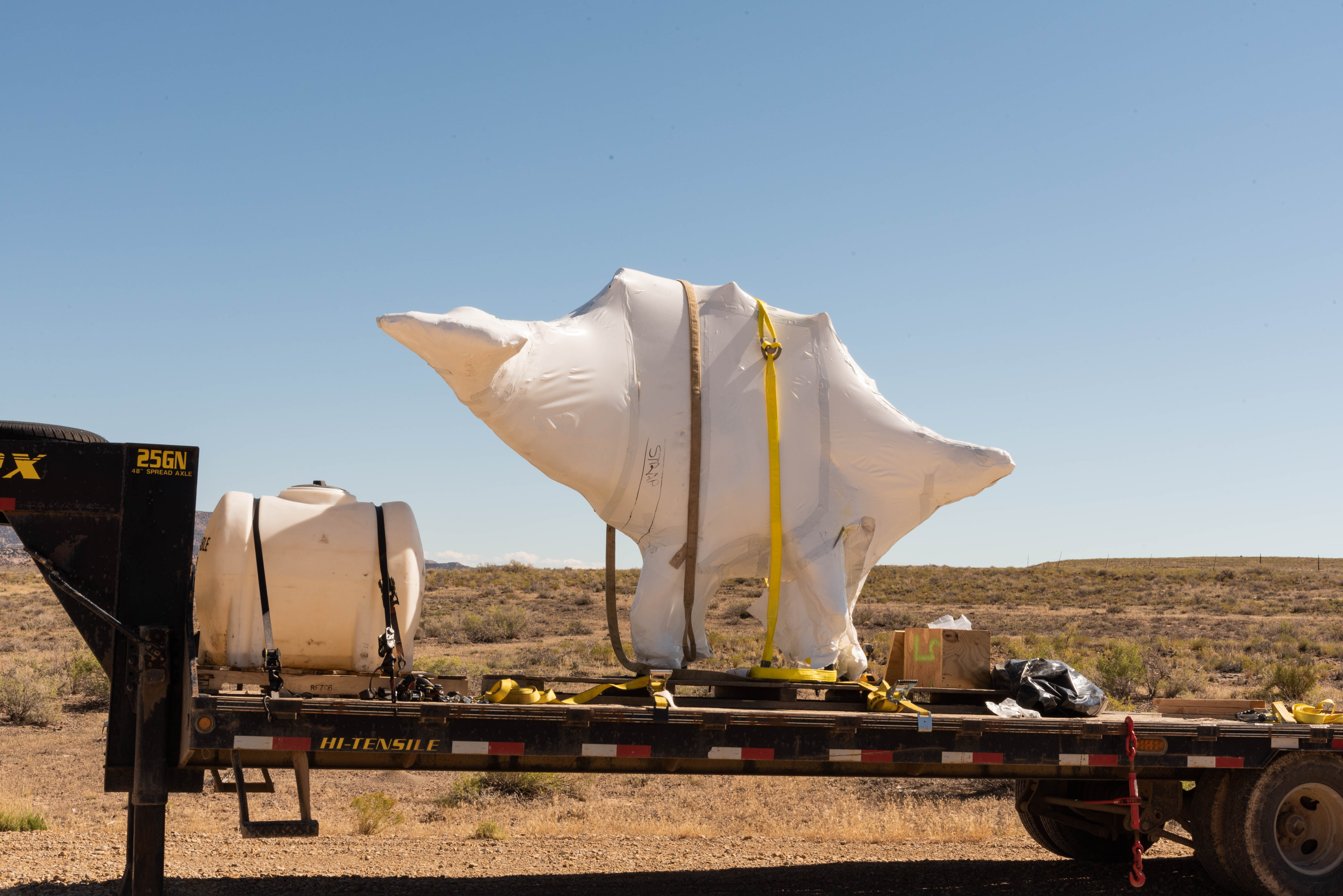