I recently spent some time exploring ancestral puebloan ruins in northern Arizona (May 2021) and set up camp near Flagstaff. I decided to spend an afternoon in Flagstaff looking for vestiges of old Route 66 and found a few traces in the brief time I spent looking. This is probably going to be a work in progress. Route 66 originally ran along Phoenix Avenue but was rerouted to its present location north of the railroad tracks in 1934. Now this section of route 66 is also designated U.S. Hwy 180 and business I-40. 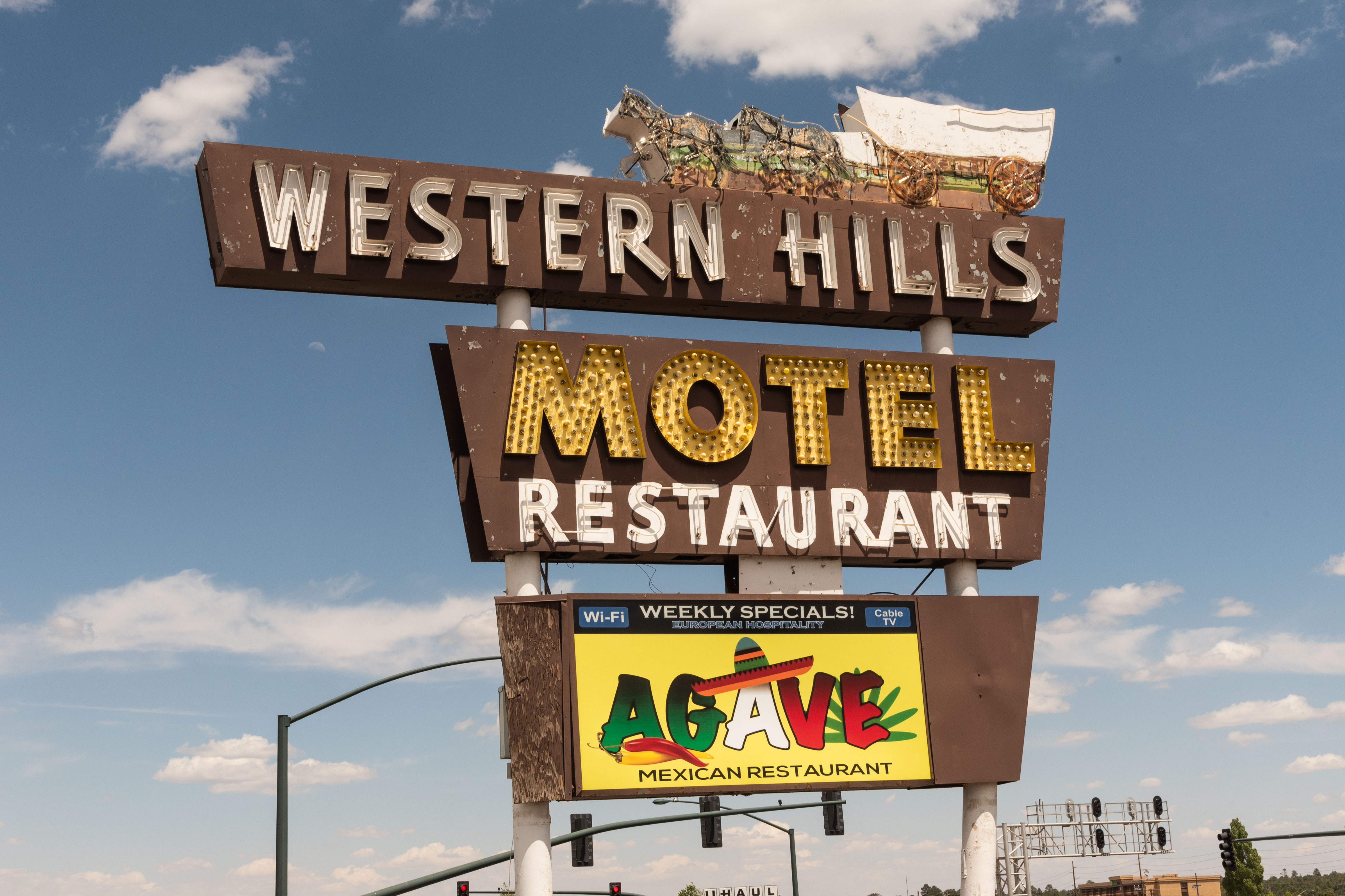 The Western Hills Motel has been in operation on Route 66 since the 1950s. It has one of the better neon signs still in operation. 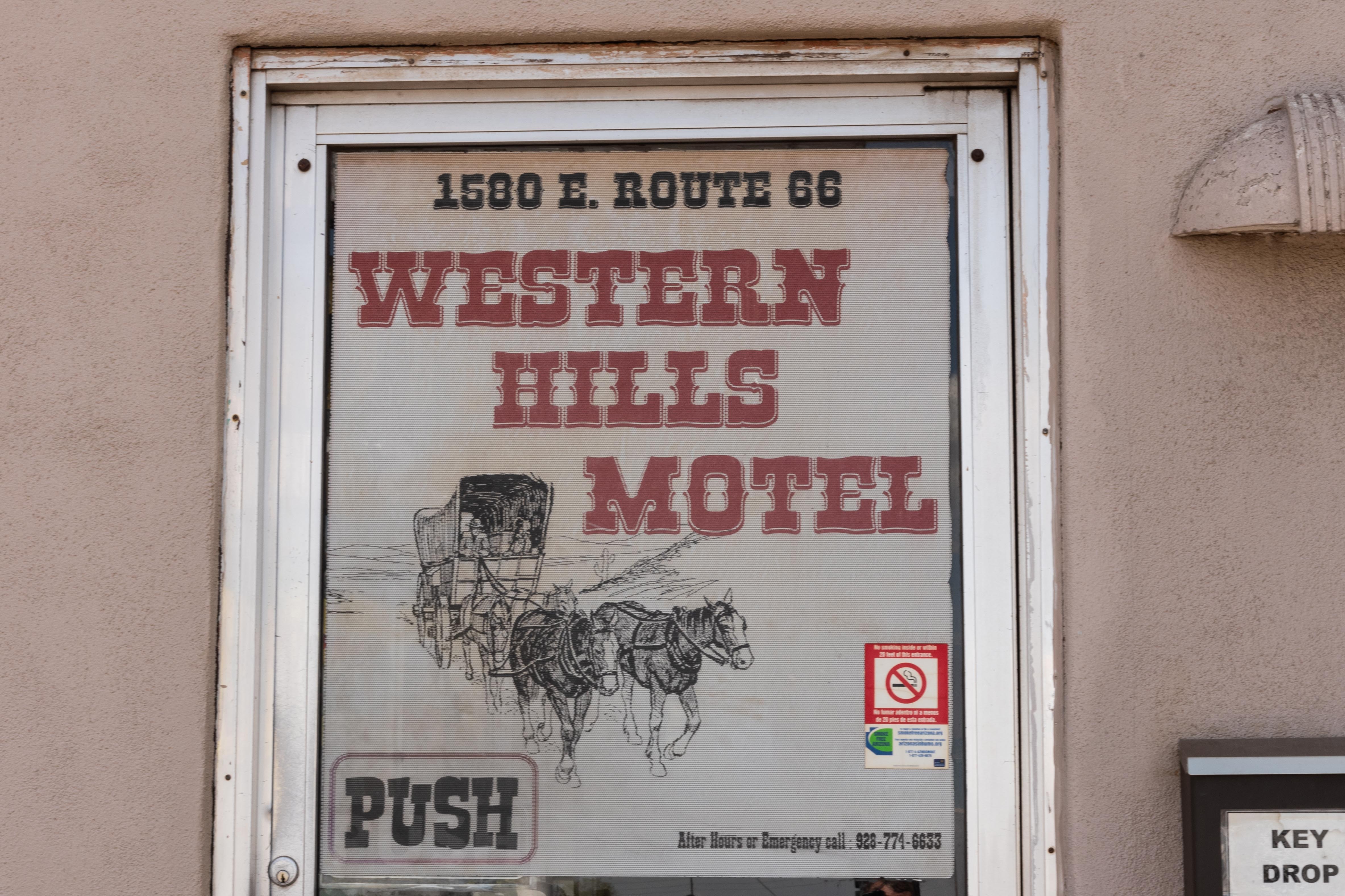 This mural was painted by Mural Mice Universal (artists R.E. Wall and Margaret Dewar). They call it a chronological storyboard of various eras of Route 66 from its beginning in 1926 to its end in 1985. The story begins on the right side of the mural and proceeds to the left. 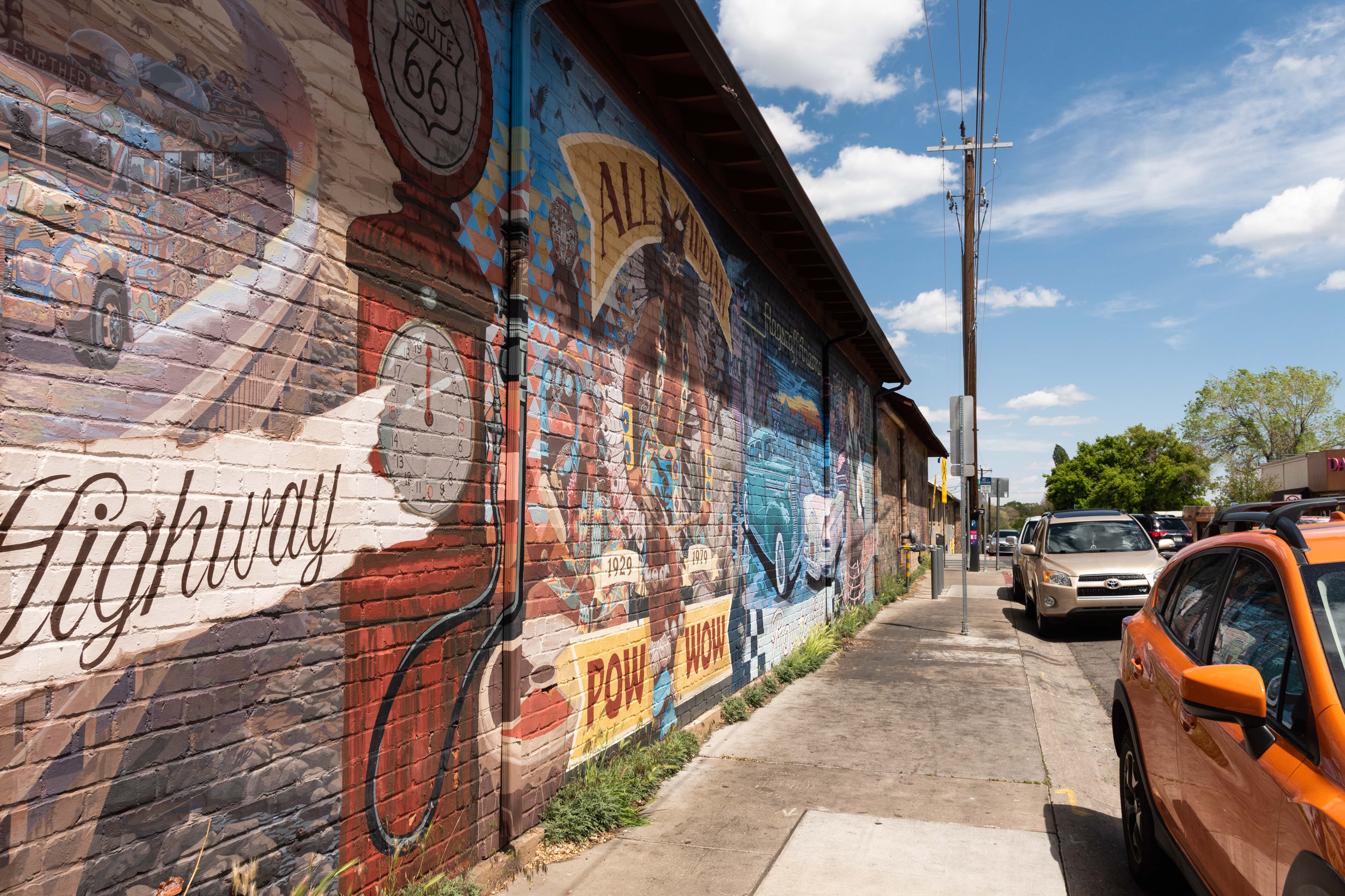 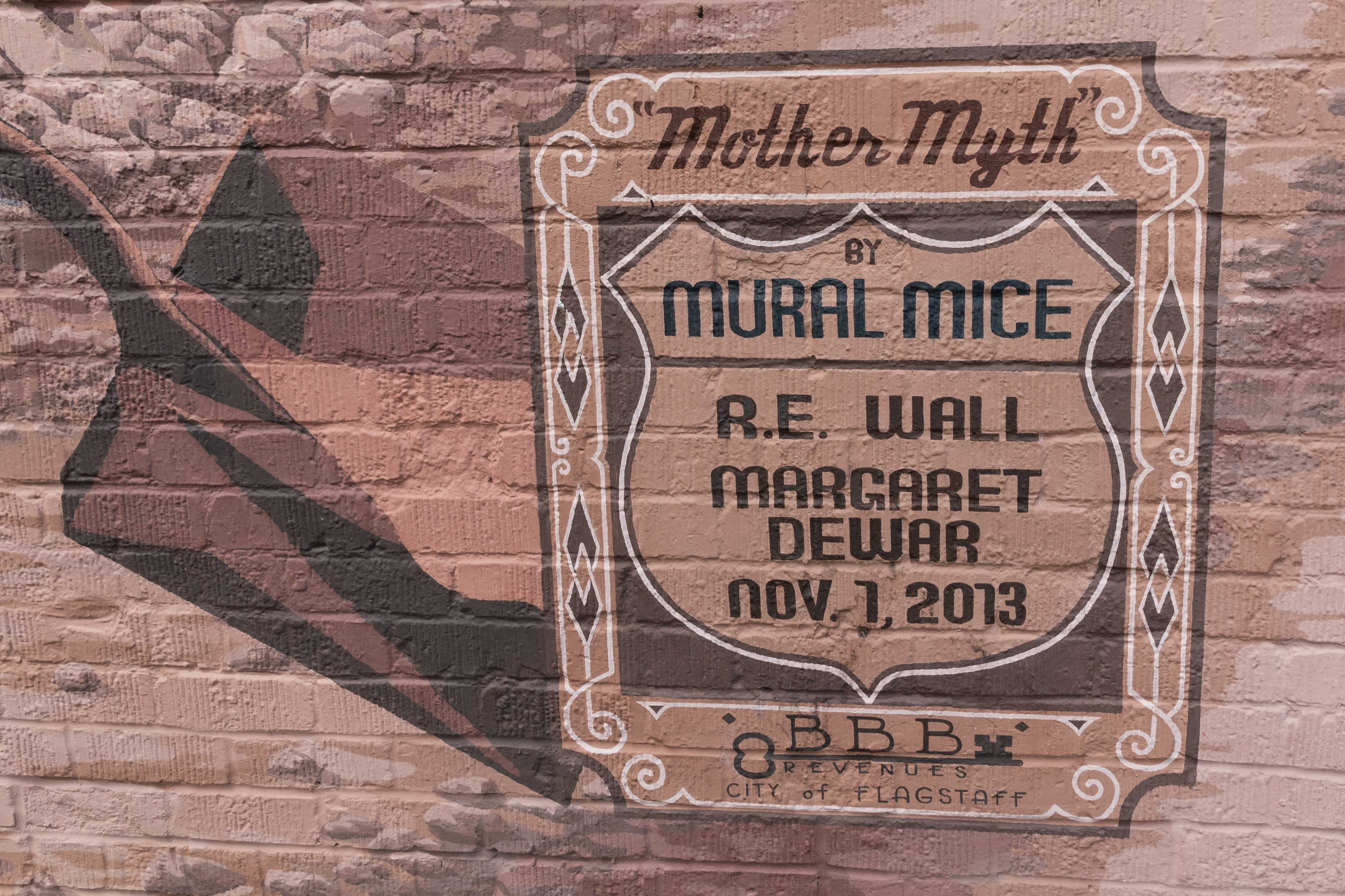 The panel with the title, artists, and date is placed at the lower right corner of the mural. The artists divided the mural into scenes depicting different eras in Route 66's existence. I have appropriated the titles they gave to each era for use in my photos. Hope they don't mind. 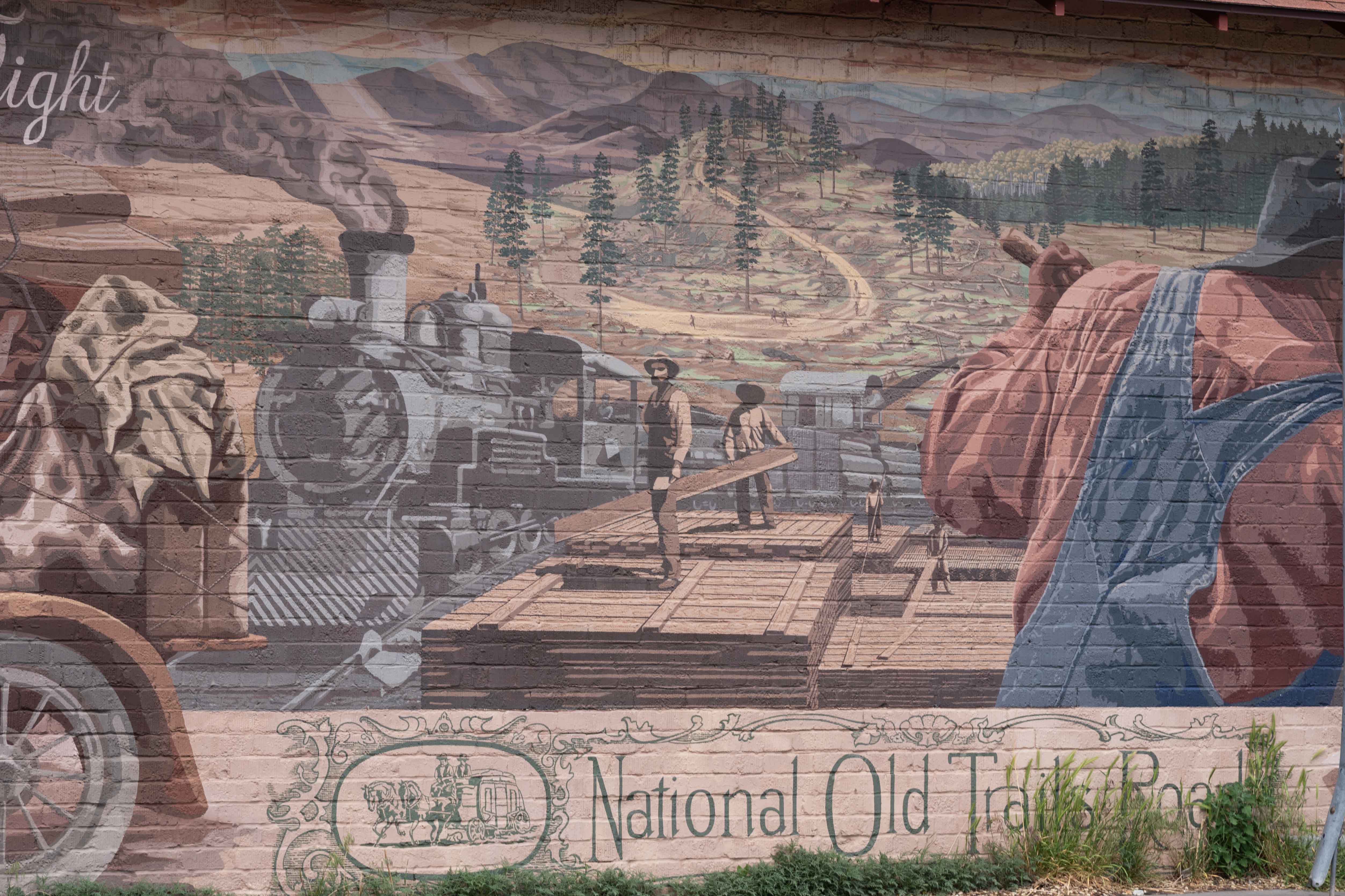 1926 - Birth of a Legend
Beginning from the right the first era is "Birth of a Legend" and depicts the construction of what was to become Route 66 by African Americans and American Immigrants.

1930s/1940s - Dust Bowl to World War II
During the Great Depression and Dust Bowl of the 1930s the "Mother Road" carried a destitute population west in search of a better life (Road of Flight - right photo). 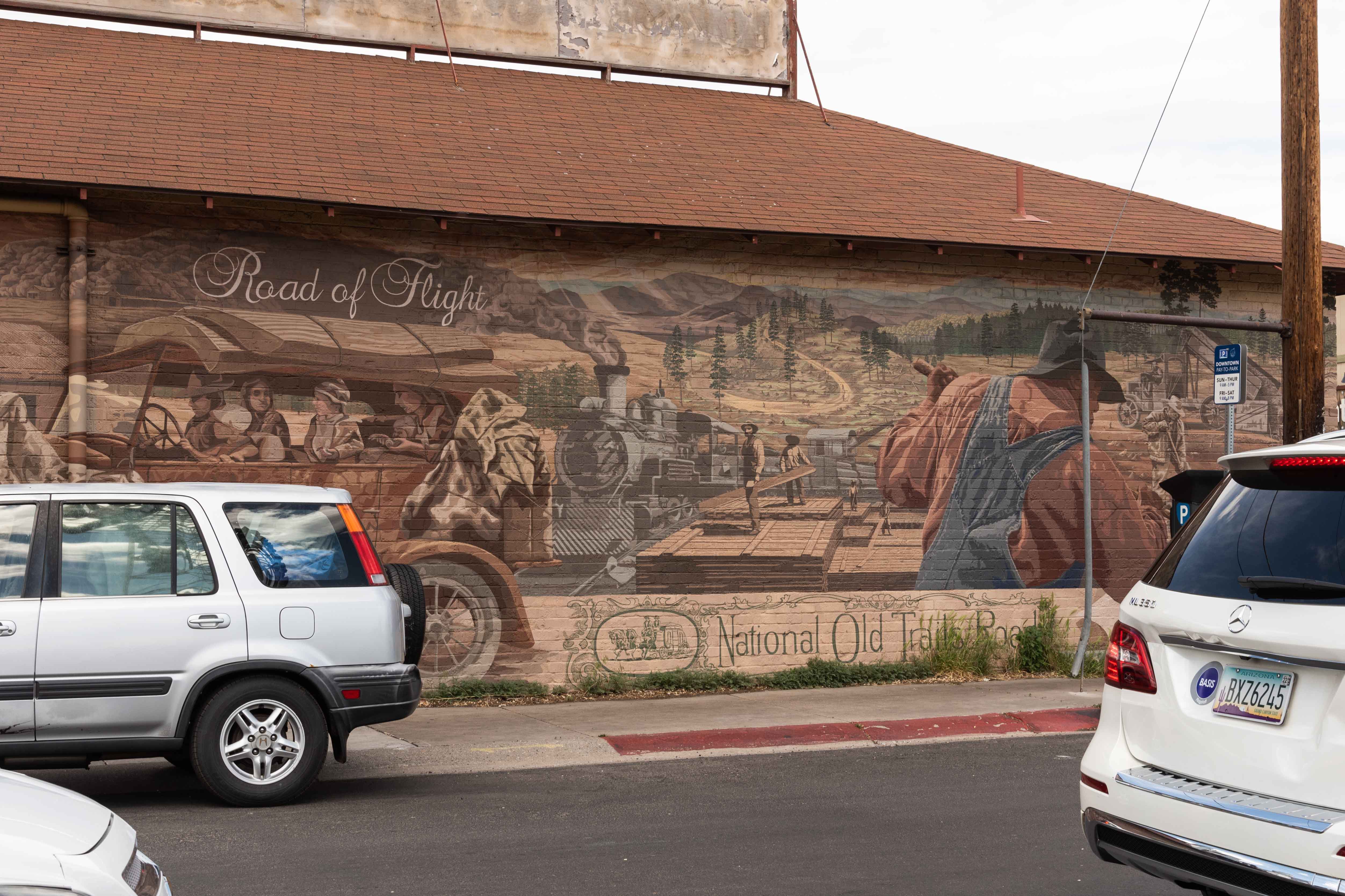 1950's - The Neon Strip
To my way of thinking this panel personifies Route 66 more than anything else. People with newfound prosperity following WWII would pile into their automobiles and cruise the "Main Street of America" with its mom and pop eateries and motels, funky attractions, and snazzy neon signs. 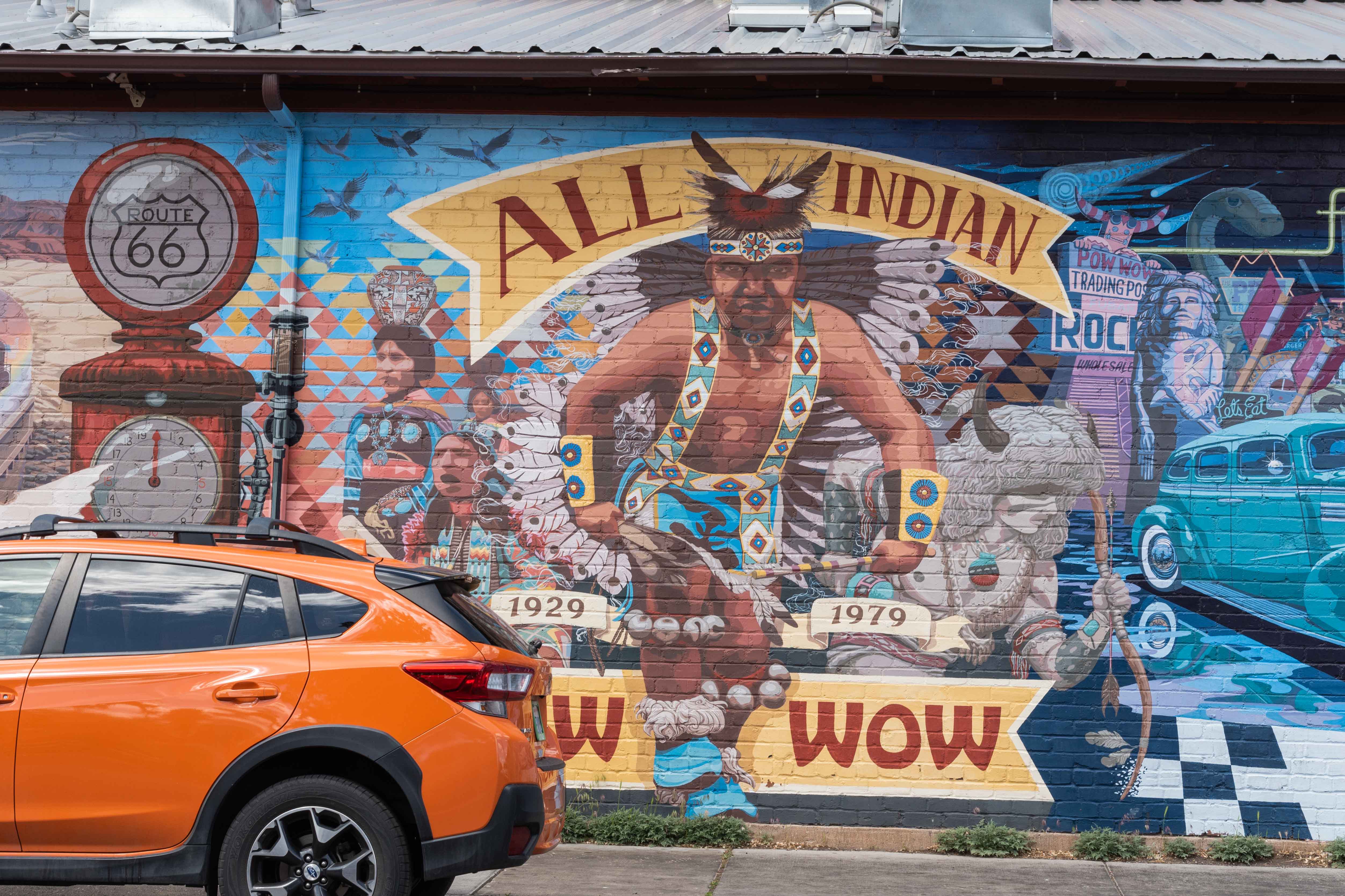 Native Culture
The artists title this panel simply "Native Culture". The All-Indian Pow Wow was an annual event from 1929 to 1979. Thousands of Native Americans would converge on July 4th weekend to participate in dances and parades along Route 66.

1960's - 1970's
The hitchhiker is Looking for America along with the artists' dog, Ruby. Also pictured is the Merry Pranksters' bus, Further.

1985
The photo to the right shows the western end of the mural with I-40 passing over a decommissioned Route 66. 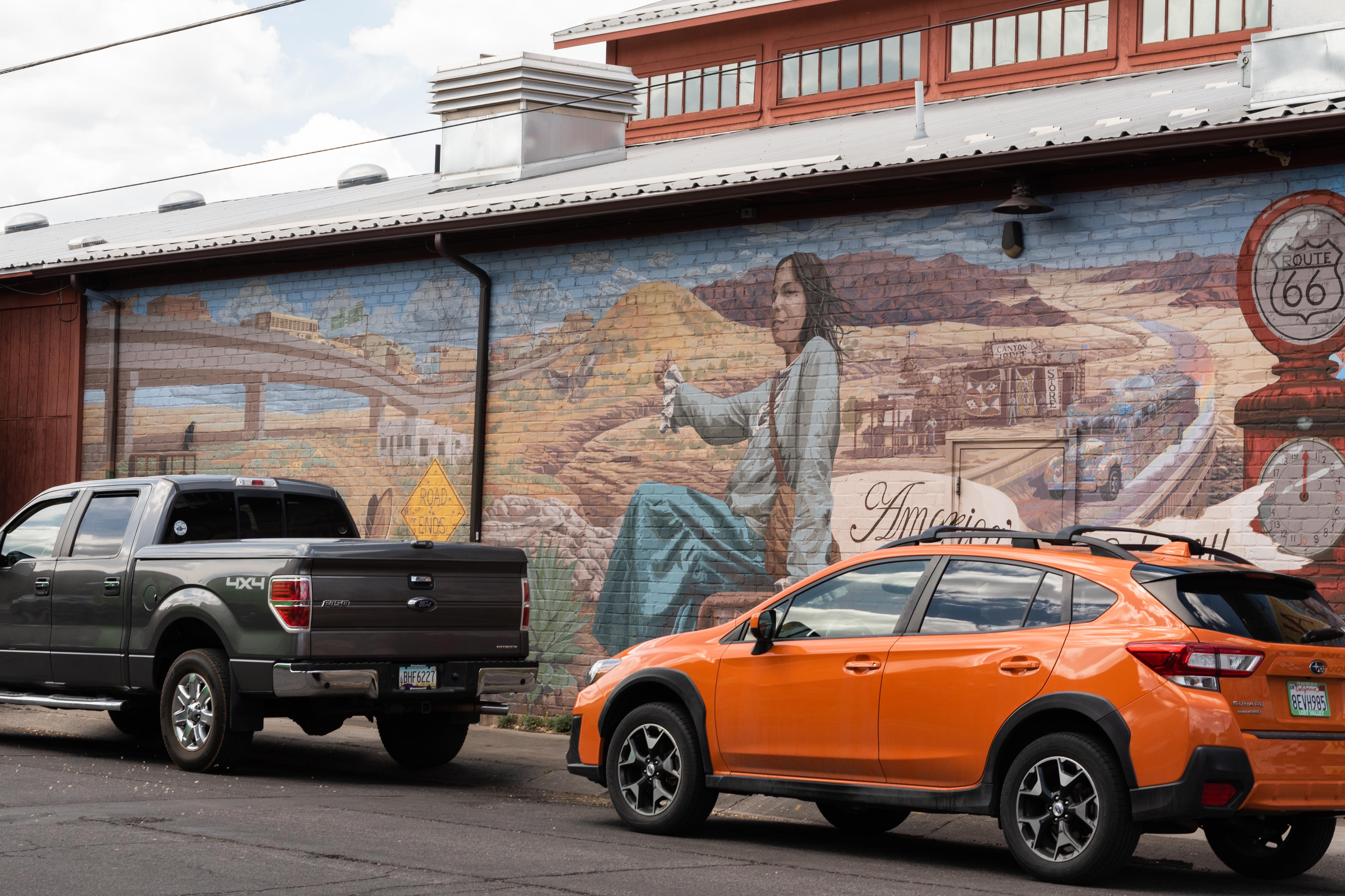 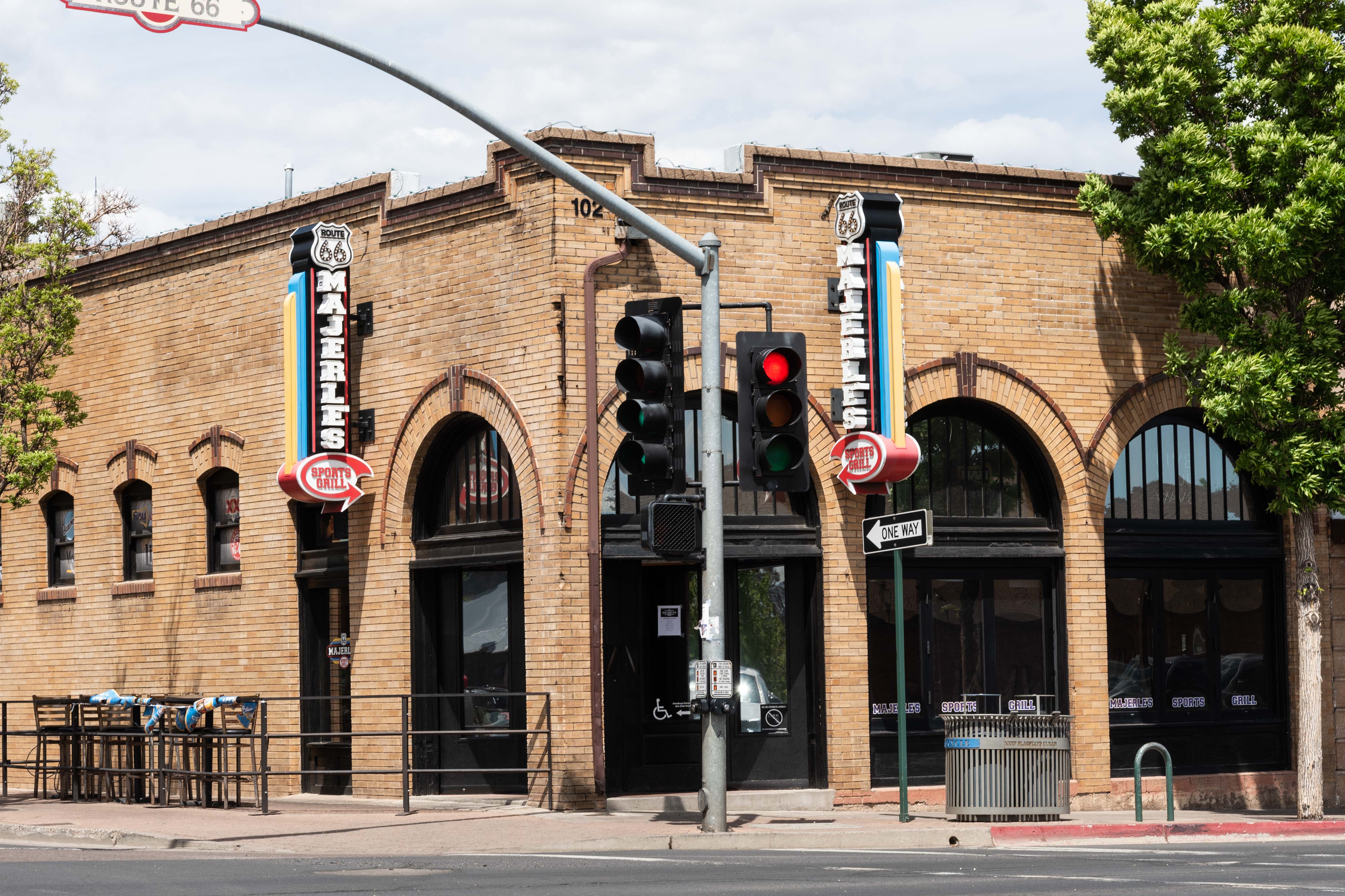 The historic Grand Canyon Cafe is pictured to the right in the photo on the right. It opened Dec 18, 1942. The Wong family, who operated it for decades sold it in 2016. Since then it's been bought and sold a couple of times but I believe is it closed now. The restaurant kept its neon sign, jukebox, and retro booths throughout its long history. 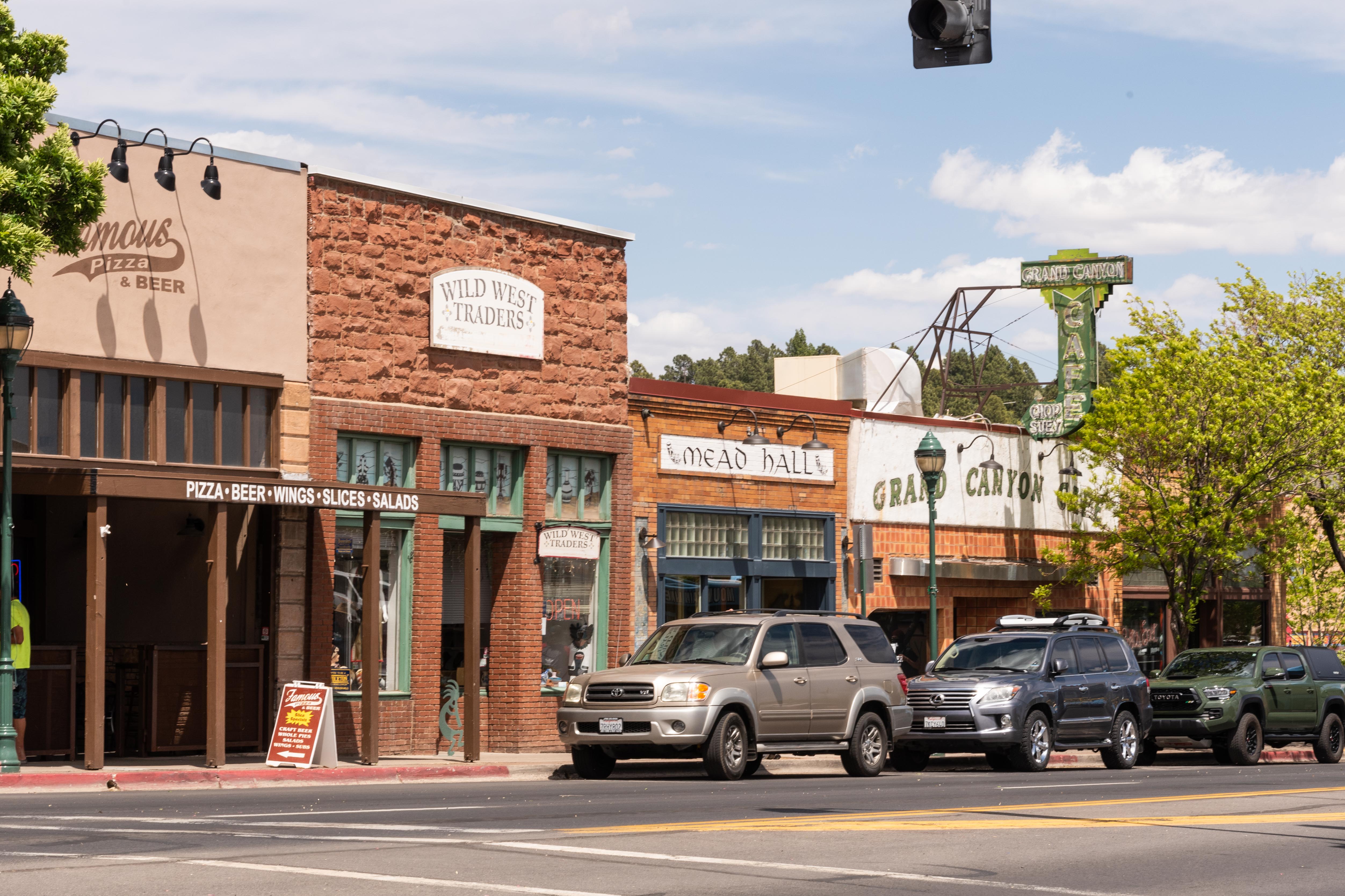 Flagstaff has been around since 1876, so it has its fair share of historic buildings and places. Historic buildings in and around downtown Flagstaff include the Abineau Building 1912, Brannen Buildings 1883-87, Church of the Nativity 1888-1930, Citizen’s Bank Building 1903, Coconino County Courthouse 1894, Elks Hall 1899, Federal Building 1936, Finley Building 1913, Masonic Building 1917, McMillan Building 1886, Nackard Building 1922, Orpheum Theater 1916, Riordan-Babbitt Building 1917, and Weatherford Hotel 1898, none of which I photographed. Many of these buildings were built with bricks of red sandstone that was quarried right in Flagstaff. Flagstaff also has 7 historic districts that have made it on to the National Register of Historic Places. I didn't visit any of these either. Definitely need to schedule one or two return visits. Flagstaff's downtown suffered from urban decay through the 1970s and 80s but was revitalized with a major cultural heritage project in the 1990s. Today it's an eclectic mix of historic buildings, shops, boutiques, eateries, and drinkeries. 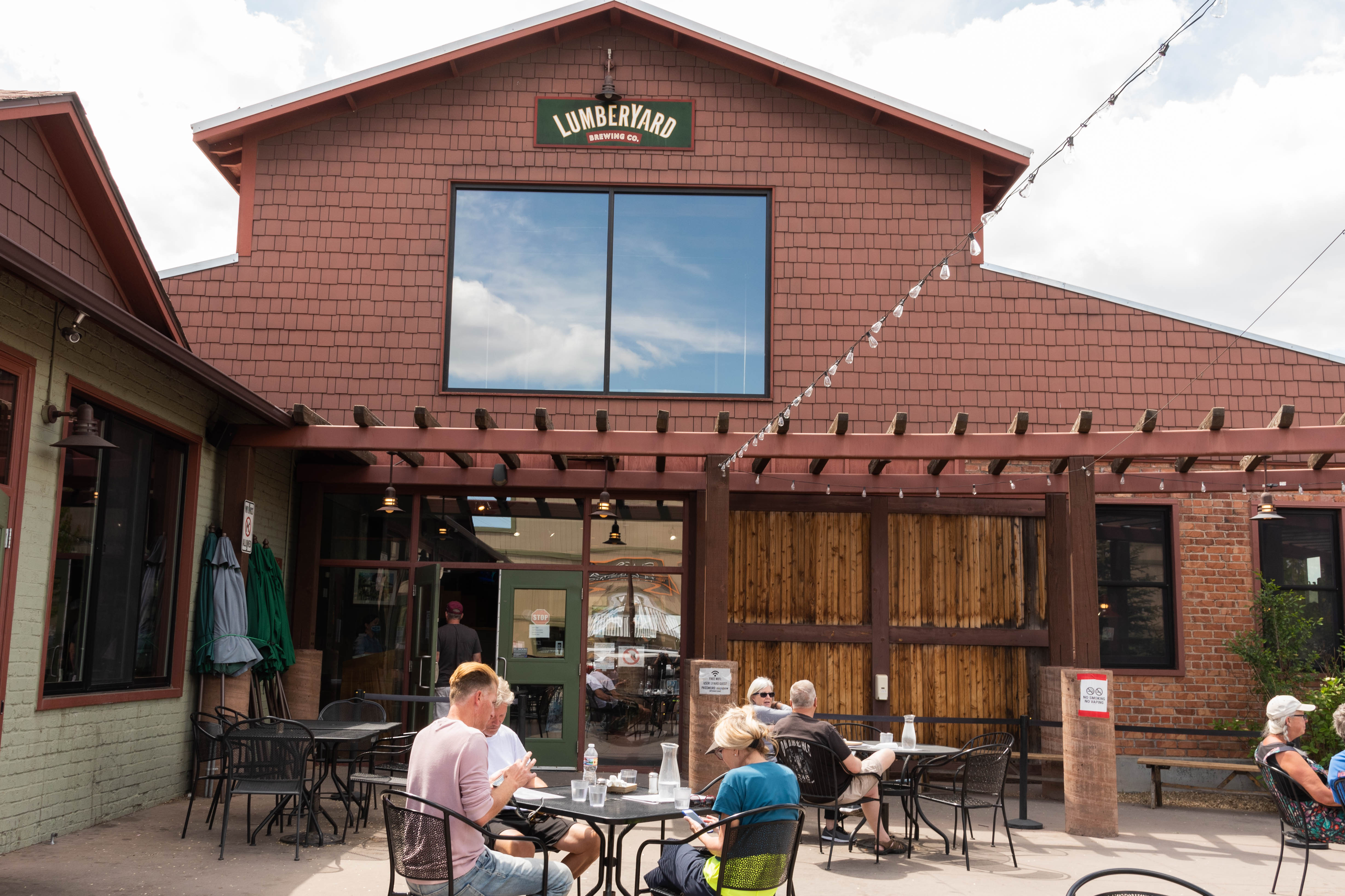 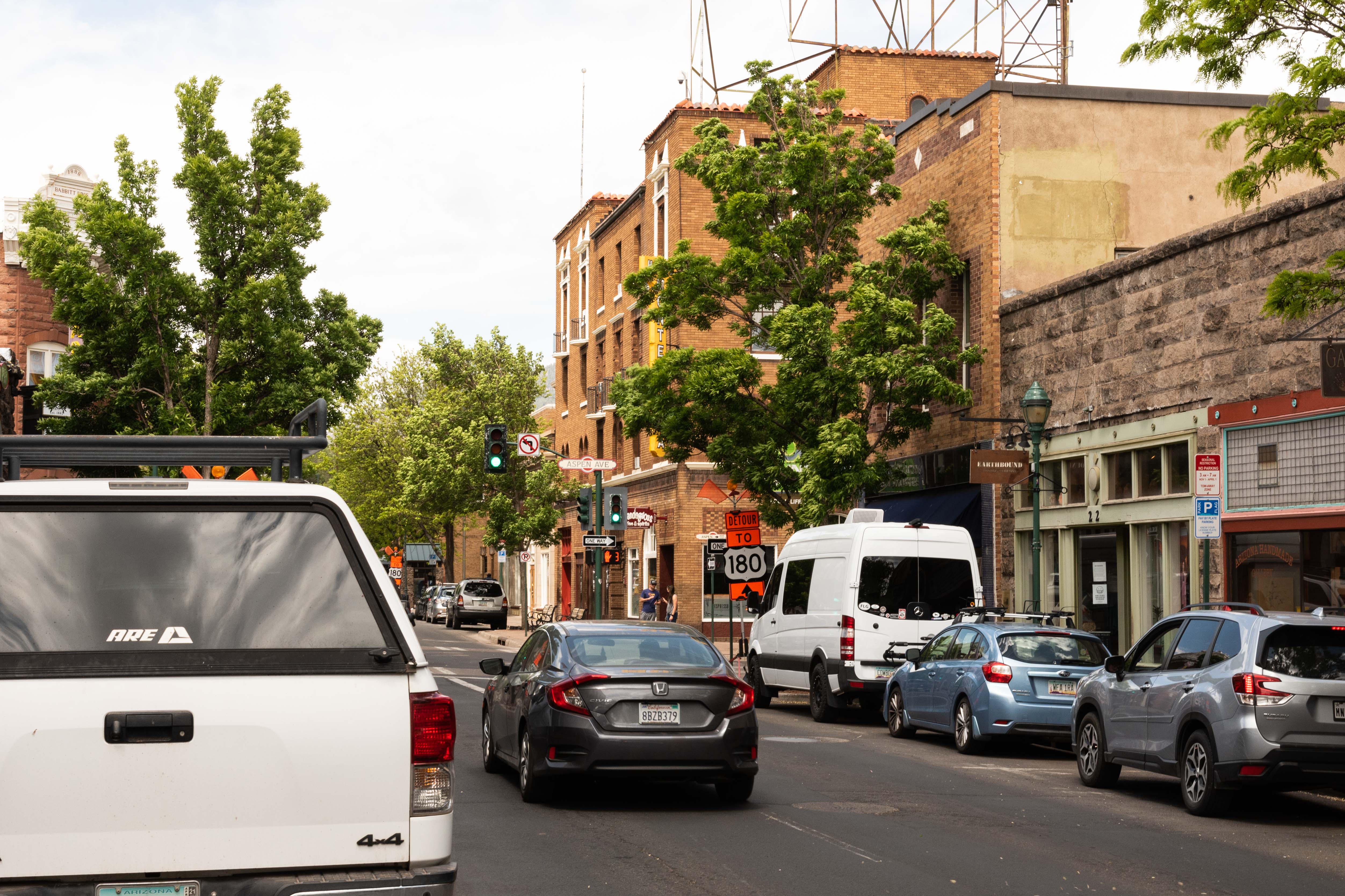 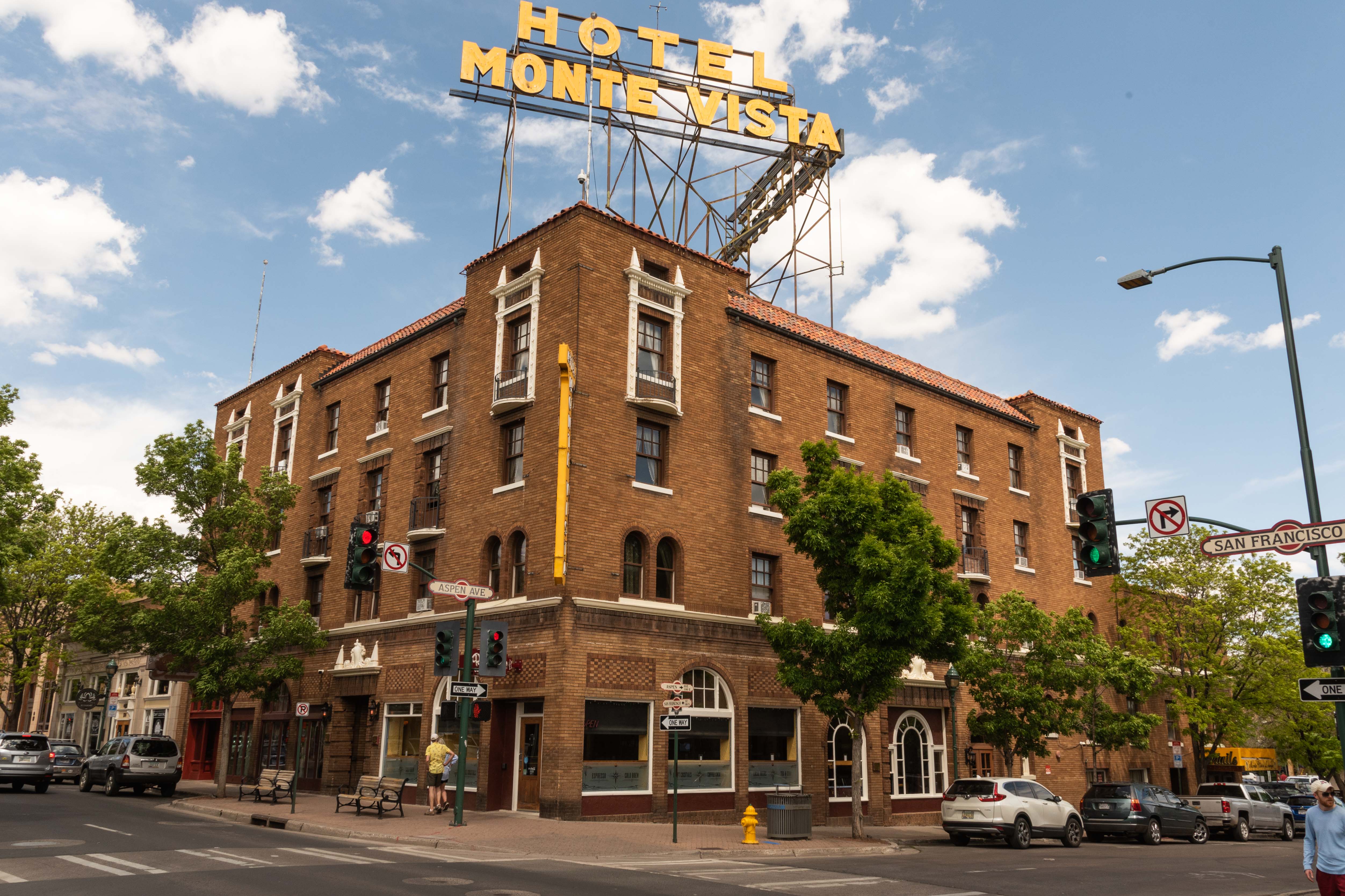 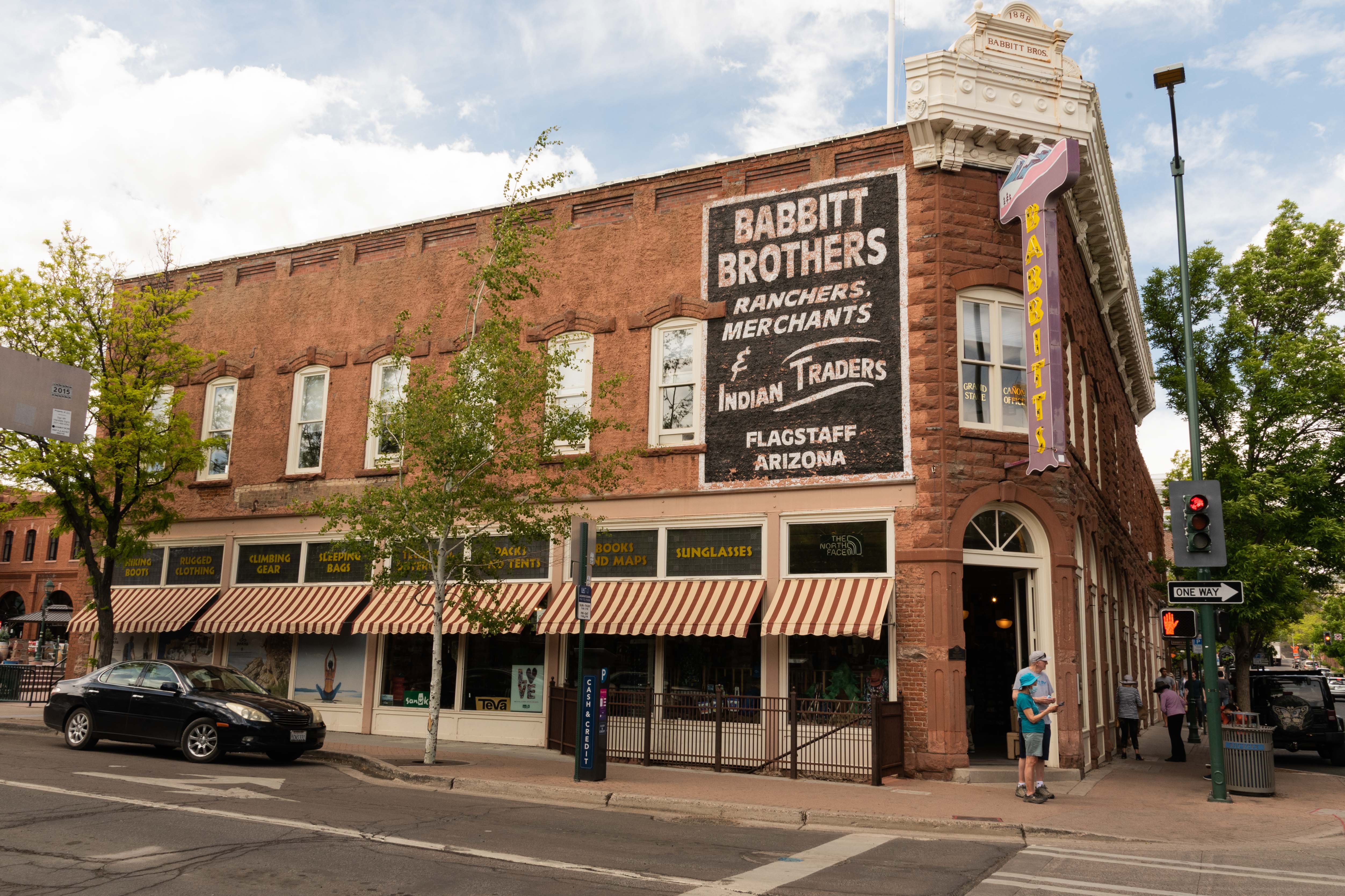 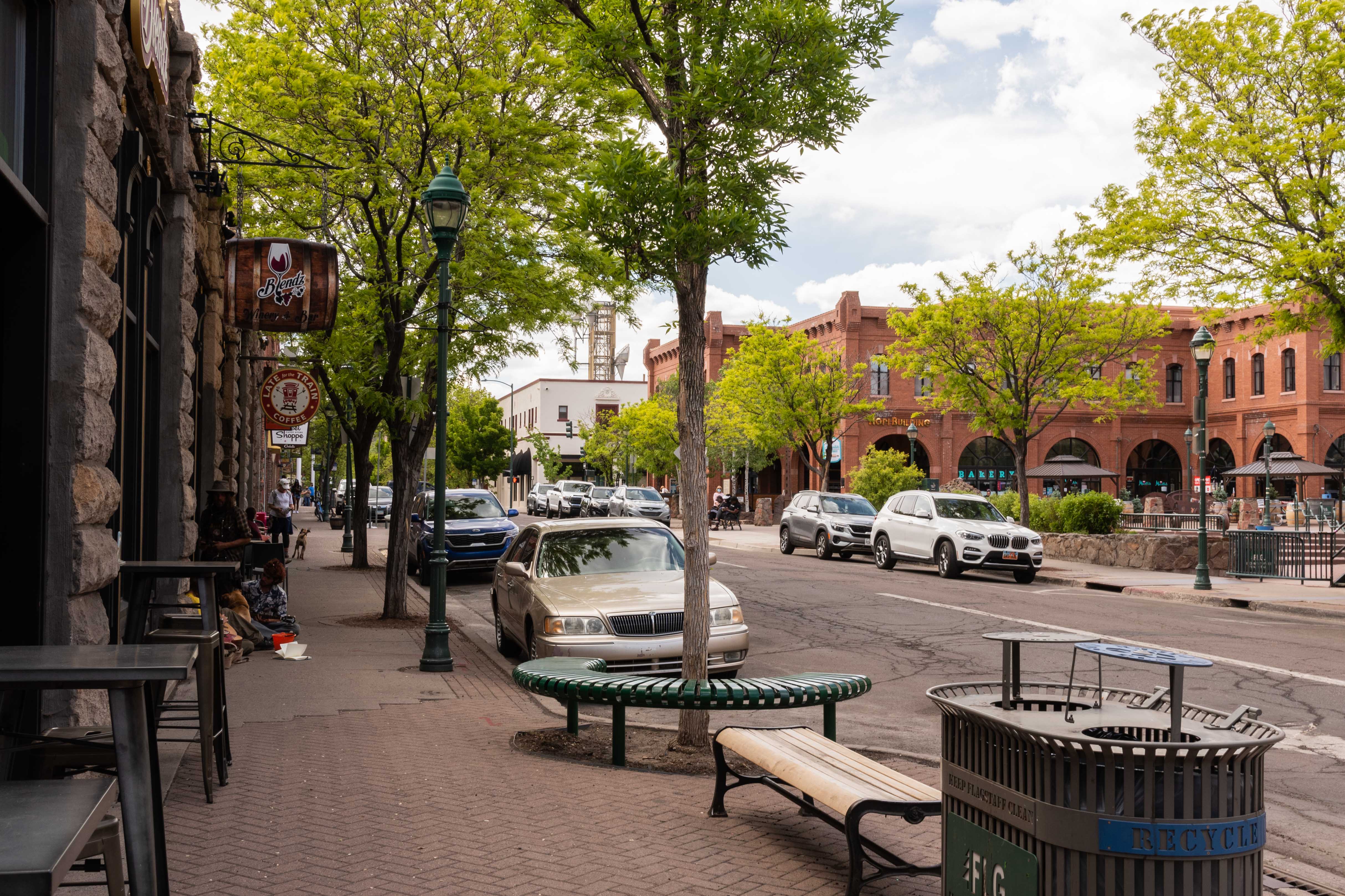 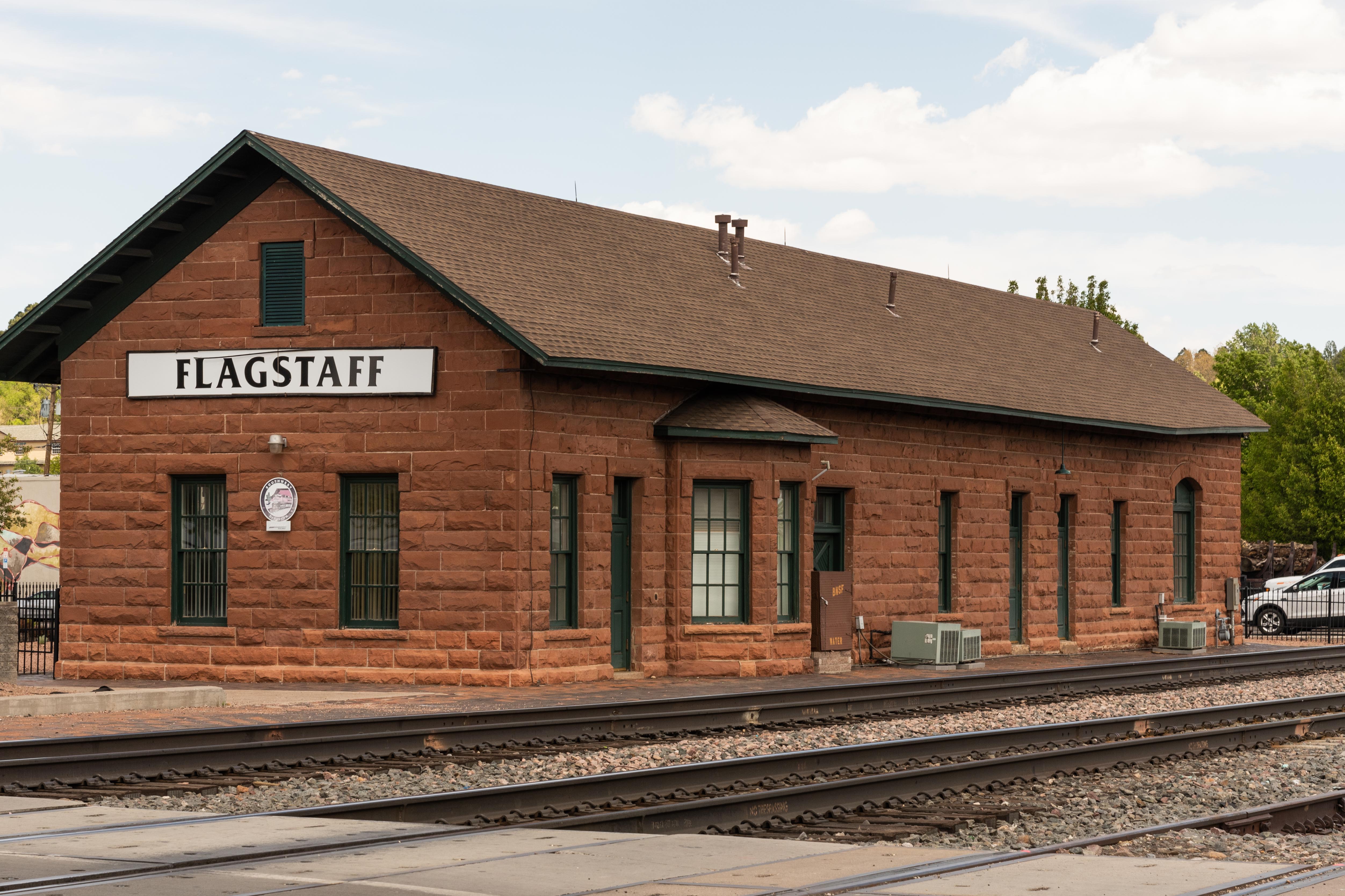